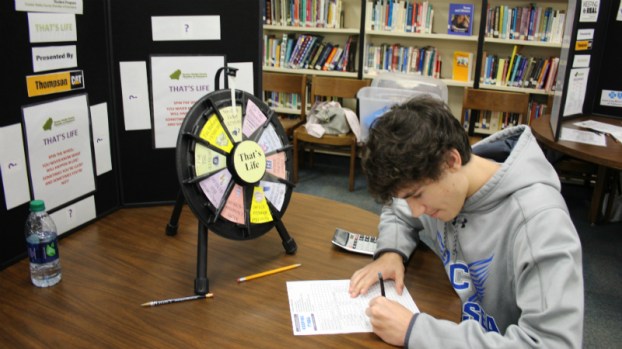 CHELSEA – Will Humphrey found himself in a difficult financial situation: only $73 left for the month and with no insurance purchased yet.

Humphrey, a student at Chelsea High School, was participating in the Keeping It Real program offered by The Shelby County Chamber on Friday, March 15, but he learned that adults face such decisions regularly.

Then, based on those numbers, they learn budgeting and managing expenses by visiting a series of booths to “pay” for housing, transportation, child care, utilities, groceries, clothing, education and more.

As a vet tech, Humphrey earned a $24,000 annual salary and was single with no kids.

He said he was surprised to have to pay $175 a month for fuel.

“I know gas is expensive, but geez,” said Humphrey, who chose to drive a 2011 Toyota Avalon to save money compared to the other options. “A car is a car.”

The expenses were often tailored to each student’s specific situation. For example, child care was not required if one spouse in the scenario did not work; also, the cost was based on the age of the children and a 10-percent discount was factored in for additional children.

The program is presented as part of the Shelby One Next Level Up Workforce Readiness Initiative, and volunteers from across Shelby County manned the booths, often aligned with their career fields.

Kala Peters of First US Bank helped students at a table where they decided how much to put into savings.

“We tell them it’s very important to put something back, even if it’s just $10 to $15 a month, but we encourage them to do 10 percent,” Peters said.

Career Prep teacher Kyle Caldwell said the students have spent the year learning lessons including balancing a checkbook and the difference between debits and credits.

“This reinforces a lot we’re trying to give them in terms of real-life experiences,” Caldwell said.

Caldwell said he thinks it is important for the students to establish good financial habits early in their lives, and that it is helpful when parents also stress those habits.

By GRAHAM BROOKS / Staff Writer HELENA – The Helena Dog House business recently got some exterior upgrades thanks to... read more