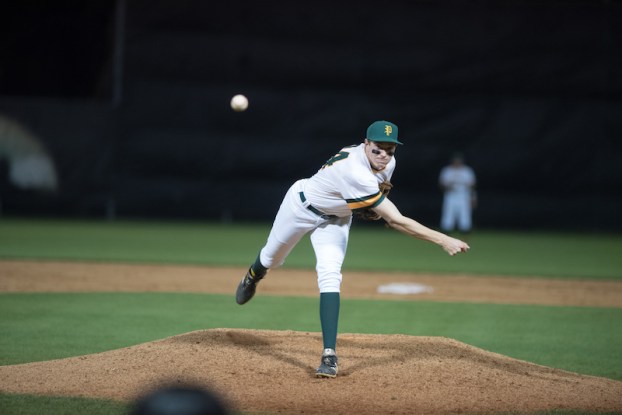 Pelham’s Kasey Clark, above, had a strong outing on the mound to lead the Pelham Panthers to a rivalry area win against Helena on Tuesday, March 19. (Reporter photo/Keith McCoy)

PELHAM – For the first 5 1/2 innings of play, rivals Pelham and Helena went blow-for-blow against each other looking to pick up their first area win of the 2019 season on Tuesday, March 19, at Pelham High School, which led to a scoreless tie to that point in the game, but then the action started.

Without a single hit in the bottom half of the sixth, Pelham was able to finally put together some offensive success to take the lead late in the contest.

The effort started when Carter Reid reached base on an error to lead off the inning, before Kasey Clark was hit by a pitch to put two aboard with no outs.

Following a sac bunt to move both base runners into scoring position, and then a fly out, there were two outs on the board. Pelham was close to spoiling its best opportunity of the game, but patience at the plate during the next three at bats and control from Helena pitching became key.

It started when Kyle Camlic walked following a five-pitch at bat to load the bases. With nowhere to be put, Jackson Weaver then battled at the plate and eventually walked to drive in the first run of the game after a six-pitch at bat that featured a full count.

That was then followed by a third walk in a row from Matthew Meddick, this time in four straight pitches, to drive in the second run of the game and the inning for a 2-0 advantage heading to the final inning.

While the Panthers never picked up hit to put those runs on the board, the 2-0 lead seemed to be enough with Helena’s struggles at the plate as well.

JC Wilburn had other ideas when he led off the top of the seventh with a single on a line drive to left field. A dropped third strike then allowed Will Griffith to reach base, while Wilburn advanced to third to put runners on the corners.

McGwire Turner then hit a fly ball to center field deep enough to drive in Wilburn to make the score 2-1 with one out and Griffith still at first.

A lineout from Riley Marks looked like it may get down and threaten a game-tying run, but it was caught by Weaver to put two outs on the board. Then one batter later, Luke Stamba hit another fly ball to right field, but it was caught by Phillip Duke to close out the thrilling game in favor of Pelham by a final score of 2-1.

The storyline of the game, however, was the pitching effort of both Set Gregory for Helena and Clark for Pelham.

Both guys dominated on the mound for the most part not allowing a run through the first 5 1/2 innings.

At the plate, Hunter Stowe, Duke and Meddick picked up Pelham’s only hits, while Helena actually picked up three more hits despite the loss. Stamba, John Stephen Heacock, Brody Moss, Wilburn, Griffith and Marks each had a hit in the game.