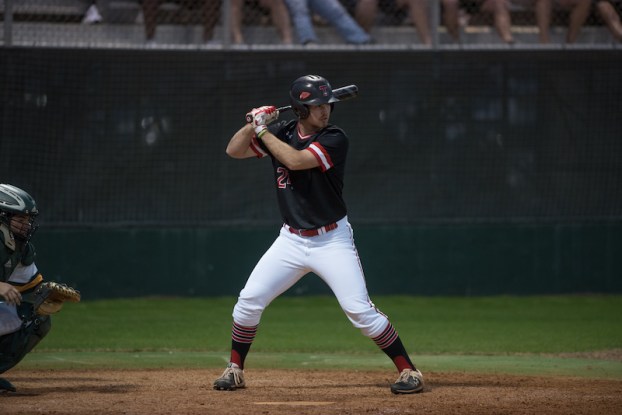 Thompson’s Grayton Arrington, above, led a strong effort at the plate for the Warriors in an 11-4 win over Spain Park thanks to going 3-for-4 with three RBIs. (Reporter photo/Keith McCoy)

ALABASTER – Despite falling behind 1-0 in the top of the first, the Thompson Warriors scored three runs in each of the first three innings to eventually pull away from the Spain Park Jaguars in an 11-4 win over the county foe in front of the home crowd at Warrior Park on Tuesday, March 19.

The Warriors (11-9) have had an up-and-down season to this point, but have found recent success to build their record above .500 after taking down a hot Spain Park team that was 13-4 coming into the matchup.

Thompson was fueled by another strong outing on the mound from Breydon Edmondson, who tossed six innings and allowed just three hits and two runs while striking out nine. The Warriors were also helped out by a strong performance at the plate totaling 12 hits to Spain Park’s four in the game.

Despite the impressive showing, it was Spain Park that jumped up first in the game thanks to a solo shot from Colton Ledbetter to lead the game off.

Thompson, however, showed its clam nature at the plate early in the bottom of the first inning. Carson Hobbs reached on a walk, Nick Freeman singled and Edmondson reached on an error to load the bases with no outs.

A ground out from Grayton Arrington, who had an impressive showing in the game with three RBIs, led to Hobbs scoring the Warriors’ first run of the game to tie it up.

Another walk from Cade Watts followed to re-load the bases. Will Kies then singled to center field to bring in the final two runs of the inning to give Thompson a 3-1 advantage early.

After Edmondson struck out the side in the top of the second, the Warriors came back to the plate and struck again.

Hobbs was again able to start the threat with his second walk in as many innings, before Freeman and Edmondson laced back-to-back singles, the latter of which brought home Hobbs.

That was followed by another single from Arrington, before a walk to Watts brought home Thompson’s fifth run of the game. Kies then grounded out to the shortstop, but with the bases loaded, the Warriors’ sixth run of the game crossed the plate to give them a 6-1 advantage through two innings.

After another 1-2-3 inning on the mound from Edmondson, Thompson stepped back to the plate ready to hammer out more hits.

In two of the first three at bats, Will Hoffman and Hobbs both singled to put two baserunners aboard with one out. A walk to Freeman then loaded the bases, before Edmondson hit a sac fly to bring in one run and Arrington hit a single to left field to bring home two more and give Thompson three runs for the third consecutive inning.

Now down 9-1, Spain Park needed a big answer, and in the top of the fourth, that’s what the Jaguars tried to do after a lead-off walk from Lane Willis, but after two consecutive outs slowed the threat, Chris Mancill was only able to drive in one run with his single later in the inning to leave the Jaguars down 9-2 through four innings.

In the bottom of the sixth, Thompson added a couple of insurance runs off a solo home run from Arrington and an RBI-single from Van Mahone to take an 11-2 advantage into the final inning.

In the top half of the seventh, Spain Park tried to put together a rally and due to a wild pitch, passed ball and RBI-groundout from Ledbetter, the Jags put two runs on the board, but it wasn’t nearly enough to overcome the nine-run deficit.

Arrington led the Warriors at the plate with a 3-for-4 game with three RBIs, while Freeman also picked up three hits and added three runs after going 3-for-3. Kies went 1-for-3 with three RBIs and Edmondson 1-for-2 with two RBIs.

A special cause: Spain Park, Thompson tee it up at 13th annual Bradley Johnson Memorial

By ALEC ETHEREDGE | Sports Editor HOOVER – While 15 different golf teams teed off on the afternoon of Monday,... read more