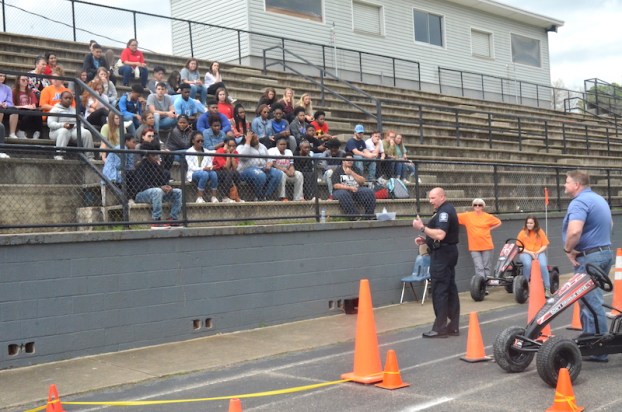 MONTEVALLO – The activity stations set up around Montevallo High School’s track March 13 might have resembled regular field day activities, but they delivered a serious message to students about the dangers of impaired driving.

More than 60 MHS students participated in the special simulation project, prior to the school’s prom, to help them understand the consequences of driving under the influence of alcohol or drugs.

“We really want you to pay attention and learn something from this,” Montevallo Police Chief Jeremy Littleton said to the students before they rotated through the stations. “We want you to enjoy your prom, but we want you to make smart decisions.”

“Lhoist has a big footprint here in Shelby County,” said Craig Gordinier, plant manager of Lhoist’s Montevallo and Brierfield facilities, adding the event was especially important to the company after an employee was killed in an accident with a drunk driver. “For Lhoist, it’s about getting more involved in the community.”

Volunteers manned the stations and provided feedback to the students after they cycled through the activities.

“We try to make this as realistic as possible and as impressionable as possible so they’ll make good decisions come prom,” Shelby County Sheriff’s Office Deputy Debbie Sumrall said.

CHELSEA – Will Humphrey found himself in a difficult financial situation: only $73 left for the month and with no... read more