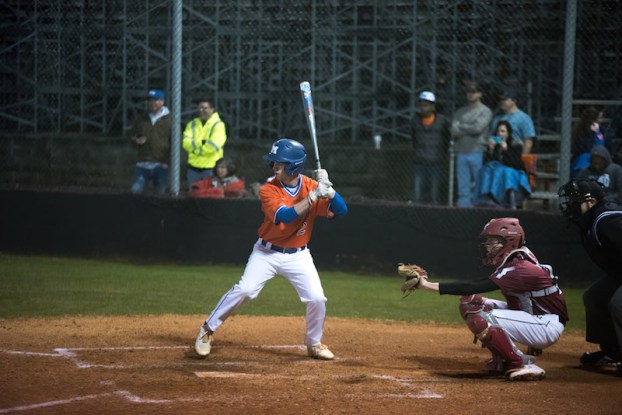 The Montevallo Bulldogs continued an impressive season with their third area win over Childersburg on Tuesday, March 19, to improve to 12-2 this year. (File)

Montevallo remains perfect in area play with win against Childersburg

MONTEVALLO – Fueled by two five-run innings, 10 hits and another strong outing from Josh Mims, the Montevallo Bulldogs were able to remain undefeated in area play and move to 12-2 overall this season with a 13-3 victory against Childersburg.

The Bulldogs, who improved to 3-0 in area play, scored runs in all but one inning of the mercy-rule five-inning contest to pull away for the dominant win.

Montevallo took the early lead in the bottom of the first inning when an error on a Grant Cordes ground ball allowed Cody Posey to score after singling the at bat before, which allowed the Bulldogs to take a 1-0 lead.

Childersburg, however, came back in the top of the second with back-to-back singles to take a 2-1 lead heading to the bottom half of the inning.

Montevallo wasn’t happy about losing the lead, and it showed shortly after when Robbie Gallagher and Clay Colley led off the bottom of the second with a single and double, respectively, to put two runners in scoring position.

After a pop out put the first out on the board, Daniel Whitson stepped to the plate and locked into a battle. A balk during the at bat allowed pinch-runner Jamarius Carter to score, and three pitches later in a 3-1 hitters count, Whitson drove a ball over the right-field wall for a two-run home run that put the Bulldogs on top 4-2.

Four errors during the rest of the inning allowed Mims and Posey to both score after reaching on errors, as Montevallo had all of a sudden taken a 6-2 lead through two innings of play.

Childersburg tried to answer in the top of the third with a quick run thanks to a lead-off double, followed by an RBI-single to cut the deficit to 6-3, but that became the team’s final run of the game.

After a scoreless third inning, Montevallo seemingly put the game away in the fourth.

It started with back-to-back doubles form Mims and Malik Inabinette, the second of which drove in Mims for a 7-3 lead. Following a walk to Posey, Cordes singled in Inabinette.

A fielder’s choice then allowed Cordes and Posey to both move into scoring position, before an error by the shortstop and a double from Colley brought home three more runs to give Montevallo an 11-3 lead through four innings.

The Bulldogs closed the game out in the bottom of the fifth when Posey and Cordes strung together back-to-back singles with two outs to bring home the final two runs in the 13-3 win.

Posey, Cordes and Colley each had at least two hits and one RBI, while Whitson, Gallagher, Inabinette and Mims all had hits as well.

By ALEC ETHEREDGE | Sports Editor BIRMINGHAM – It’s been a slow start to the 2019 baseball season for the... read more