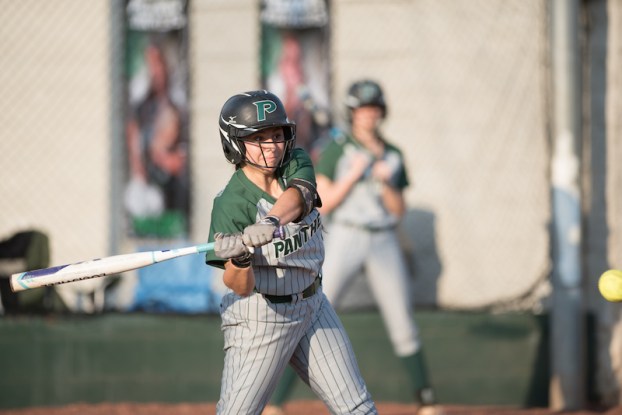 HELENA – A five-run second inning sparked the Pelham softball team on Tuesday, March 19, and led to an 8-3 victory over area rival Helena on the road to move to 2-1 in area play and 15-7 overall.

The Panthers put up all eight of their runs between the second and fifth innings to go on to win their sixth consecutive game, while Helena fell to 6-7 overall and 0-2 in area play.

A big reason for Pelham’s success in the game was the pitching of Brianna Copeland. Her presence in the circle kept Helena from putting together chunk runs throughout the game, and gave the offense confidence at the plate.

She got the complete-game win after allowing six hits and three runs, while striking out seven batters on 149 pitches.

Despite her strong effort, Helena was able to strike first in the bottom half of the opening inning when an error at first base allowed Chaney Handley to score for a 1-0 advantage.

Pelham, however, answered in a big way.

In the top of the second, the Panthers had just one runner on first with two outs, but an impressive two-out rally ensued. Lauren Watts kicked it off with a walk, followed by a single from Yoly Paredes to load the bases.

An inning later, Watts improved that score by one run when she hit an RBI-single to center field for a 6-1 advantage through three innings.

Helena tried to battle back in the bottom of the fourth thanks to its strongest inning of the game.

The Huskies used back-to-back singles from Alana Scot and Julia Wilkins and a walk to Sara Ezekiel to load the bases. A fielder’s choice then brought home one run and an RBI-single from Peyton Wilkins another run.

A walk one batter later then loaded the bases again, but Copeland was able to force a fly out to end the damage, as Pelham got out of the inning with a 6-3 lead.

That sparked the Panthers to start the top of the fifth and two batters after Jaley Davis singled to lead off the inning, Paredes rocketed a two-run home run over the left-field wall for an 8-3 advantage.

That closed out the scoring in the game, as Copeland had more than enough cushion to pull off the win.

At the plate, Paredes finished the game 4-for-5 with two RBIs and two runs scored. Helms went 3-for-4 with two RBIs and one run scored. Nevaeh McIntyre, Copeland, Davis, Watts and Tomlinson all picked up hits as well. Tomlinson added two RBIs, while Copeland and Watts each added an RBI as well.

Julia Wilkins led Helena at the plate with a 3-for-3 game, while Peyton Wilkins went 1-for-2 with an RBI.