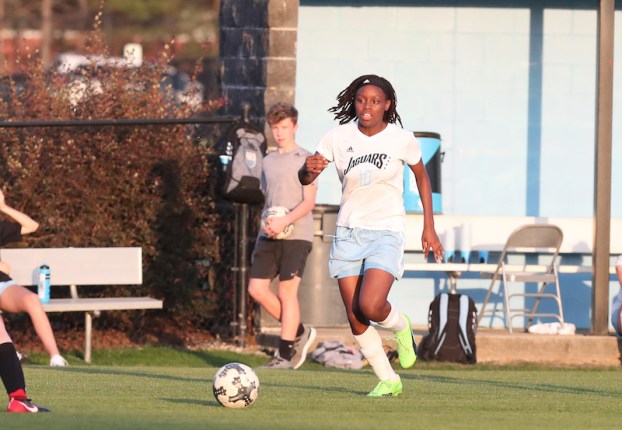 The Spain Park soccer team heads into spring break with a 10-2-2 overall record, a 2-1 area record and five consecutive wins after taking down Mountain Brook 2-0 on Tuesday, March 19. (File)

HOOVER – The Spain Park girls soccer team has been on a roll in its last 13 games winning 10 of them, tying in two of them and only losing one of them, and on Tuesday, March 19, the Jaguars continued a current five-game winning streak—their second of the season—by taking down No. 10 Mountain Brook 2-0.

With the win, Spain Park improved to 2-1 in area play with wins against Mountain Brook and Hewitt, and the only area loss coming at the hands of No. 2 Vestavia Hills (12-0).

Now 10-2-2 on the season, the Jaguars used two second-half goals to fuel the victory and continue the win streak.

The first half of the contest was a defensive battle between the two teams that have played good defense for the most part this season.

The Spartans, who are 3-3-4 this season, came into the game having given up more than one goal just once in their last eight games.

Spain Park has also had success defensively this season with seven shutouts in its 14 games, but the Jags had given up two goals or more in four of their last six games.

With that said, two games before the area showdown with the Spartans, Spain Park shutout area foe Hewitt-Trussville 3-0 to prove the defense comes ready to play in big moments.

That happened again in a crucial area contest against Mountain Brook with the winner having a leg up to making the playoffs with Vestavia Hills the likely No. 1 team coming out of the area.

After a half of strong defensive play from each team, it was obvious that each team was going to come out aggressive in the second half looking for the difference-making goal, meaning the defenses would be tested.

Both played strong, but early in the second half, Spain Park got the confidence boost it needed on offense when Haley Greene broke the scoreless tie with the game’s first goal to put the Jags on top 1-0.

It didn’t take long for the Jags to let that goal fuel another as Jasmine Greene quickly added a second goal right after to put Spain Park on top 2-0.

With the way the Jaguars were playing defensively, it was tough to see the Spartans somehow equalizing the game.

Instead of playing with less energy after gathering the 2-0 advantage, the Jags actually played with even more energy down the stretch to stave off late attacks by the Spartans to pull off the 2-0 shutout.

Spain Park will now go into spring break on a five-game win streak looking to rest up for a strong run in the final stretch of the season.

Oak Mountain runs away from Hoover for area win