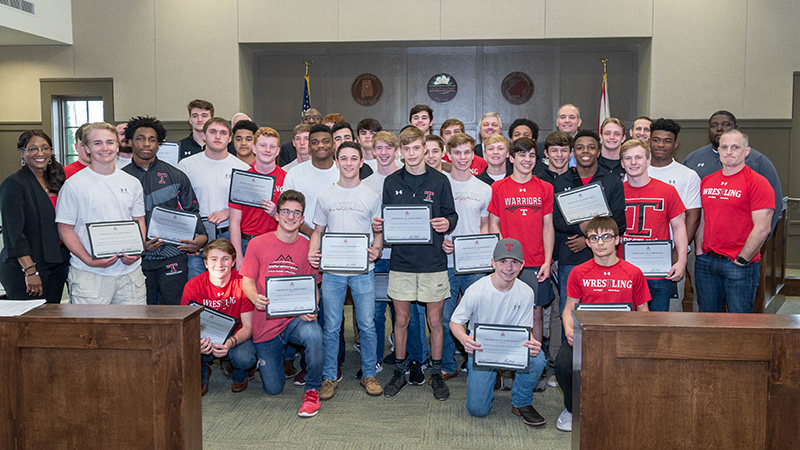 Members of the Thompson High School wrestling team are honored by the Alabaster Board of Education and superintendent during a March 11 meeting. (Reporter Photo/Neal Wagner)

ALABASTER – Nearly 60 Thompson High School wrestlers got a chance to earn some time in the city’s spotlight for the second time in three weeks on March 11, as the city’s school superintendent and Board of Education took time to praise the team’s dominating 2018-2019 campaign.

In mid-February, the Warrior wrestling team dominated the Class 7A state championship by totaling a tournament-record 180 points as a team, which was much higher than second-place Hoover, which had 116.5 points in the title tournament.

“It was a dominating season. They won the state championship by the largest margin that’s ever been recorded in the state tournament,” said ACS Superintendent Dr. Wayne Vickers. “Coach (Shawn) Weltzin is the coach who started the program, and he also recorded the program’s 500th win this season.

“What the THS wrestling program has accomplished, most of us would call that a dynasty,” Vickers added. “I want to thank you. This is a great group of young men.”

The following wrestlers were honored during the March 11 BOE meeting: