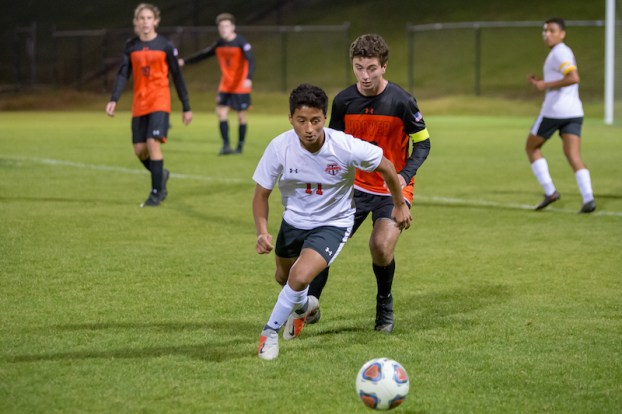 Thompson put together a strong effort against the Hoover Buccaneers on Tuesday, March 19, but couldn't find a goal until late int he contest when already down 3-0. (For the Reporter/Larry Dancy)

HOOVER – The No. 15 Thompson Warriors found themselves in familiar, yet hostile territory, as they faced their eighth ranked opponent of the season in No. 3 Hoover on Tuesday, March 19.

The Warriors showed fight early and came on late, but Hoover dominated the first half and much of the game to defeat the Warriors 3-1.

Both teams moved the ball across the field early, but it soon became a one-sided affair. After putting two shots on goal in the early going, Thompson’s offense found it hard to mount a charge.

Hoover’s front line was relentless taking 11 shots with great accuracy as nine of them found their way between the posts. MJ Dimbo was big for Thompson, recording seven saves in the first half keeping his team close, despite taking on the Buccaneers’ onslaught.

The Bucs’ second goal followed quickly five minutes later as Sam Bowder avoided the defense showing incredible skill as a ball handler. The striker’s speed quickly split the defenders, before he rifled a shot into the upper left corner of the net to give Hoover a little insurance and a 2-0 lead.

Thompson (3-5-3, 0-1) only recorded one more shot in the last 30 minutes of the first half, as Hoover appeared ready to take control. The Warriors weren’t done and took an aggressive approach after halftime taking as many shots in the first 15 minutes (four) of the final half than in the entire first period.

The defense also stepped up and limited Hoover to less than half of their first half attempts. Thompson attempted four corner kicks in the second half as well, but all were turned away. Despite their increase in production, and a couple more opportunities, the Buccaneers’ goal continued to remain tough to find and, unfortunately, the Warriors aggressive style of play left them vulnerable late in the action.

As players continued to flood Hoover territory it left fewer and fewer players back on the defensive end and in the 68th minute, Sam Bowder took advantage again.

Dribbling between players and drawing the goalie out, Bowder lofted a pass from the right corner across the goal to a waiting Nick Ibanez, who headed the ball into the goal’s wide open left side for a game sealing 3-0 lead.

Thompson didn’t relent, even with the game no longer in doubt, as senior Andres Rivera took a fumble by Hoover’s goalie and sent it into the left corner for the Warriors’ lone goal with 1:30 remaining to close out the final score of 3-1.

By ALEC ETHEREDGE | Sports Editor ALABASTER – Despite falling behind 1-0 in the top of the first, the Thompson Warriors... read more