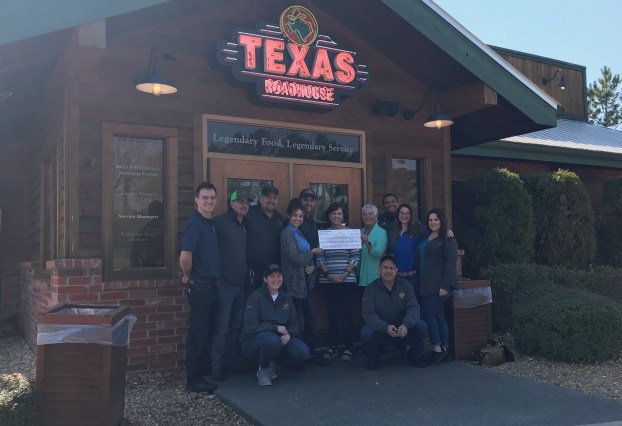 Several Texas Roadhouse franchisees present a check for $8,933 to a representative with the Community Foundation of East Alabama. The money will go to the organization’s Lee County tornado relief fund. (Contributed)

PELHAM – On Monday, March 11, several Texas Roadhouses franchises throughout Alabama came together in support of tornado victims in Lee County.

All eight Texas Roadhouse restaurants in the state donated 100 percent of its profits to help those impacted by the deadly tornado that ripped through Lee County earlier this month. According to the National Weather Service, the tornado was an EF-4 with winds that are estimated to have reached 170 miles per hour. The NWS estimated the storm’s track was a mile wide and 24 miles long.

Twenty-three people were killed and many others were injured. Brian Donegan, managing partner of Texas Roadhouse in Pelham, said his business partner wanted to find a way to help with the tornado relief and store marketer Angela Knight came up with the idea to donate a day of profits.

“We contacted each restaurant with our idea and it was their decision to participate,” Donegan said. “No one told any of us that we had to do this. It was something we all wanted to do.”

The restaurants, located in Pelham, Tuscaloosa, Huntsville, Montgomery, Decatur, Dothan, Florence and Mobile, raised a total of $8,933. The money was donated to the Community Foundation of East Alabama’s Lee County tornado relief fund.

“This is something we felt like we needed to do because the tornado affected our community,” Donegan said. “This feels close to home.”

Knight said a lot of customers on March 11 were aware of the fundraiser and wanted to show their support.

“Once we got the word out, a lot of people were very supportive,” she said.

That day, Donegan said there was a 20 percent increase in volume and sales. The amount of orders placed to-go were also higher that evening, he said.

“You can’t run a business without being connected to the community,” Donegan said. “In a nutshell, Texas Roadhouse gives us the freedom to d things like this. That’s one of the reasons we’re able to do what we do. We stand for community and we’re here to help whenever our neighbors are in need.”

PELHAM – After moving to Pelham in June 2018, Lisa Warren and her husband longed to find an active running... read more