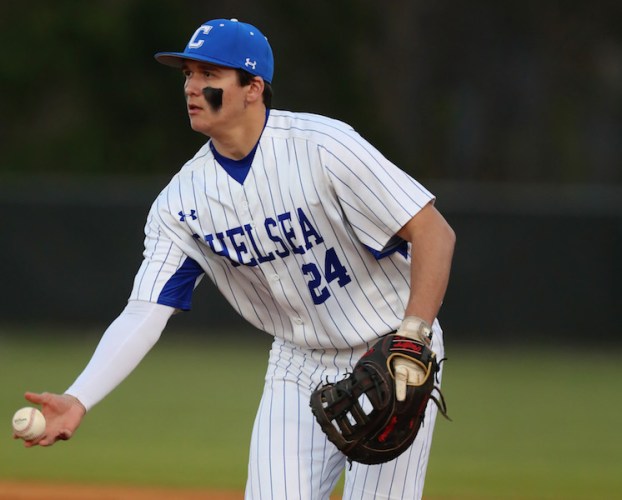 Chelsea's Will Peacock, above, hit a two-run triple in the top of the seventh to lift the Hornets to an area win against Calera. (For the Reporter/Cari Dean)

Chelsea completes sweep of Calera thanks to late triple

CALERA – Down to their final strike, trailing 6-5, the Chelsea Hornets were facing an area loss to the Calera Eagles in the eyes, before putting together a two-out rally that saw Bennett Horton reach on a single and Carter Frederick reach on a walk.

With runners on first and second, Will Peacock stepped to the plate and looked to tie or give his team the lead. Antsy at the plate, trying to play the role of hero, Peacock took the first pitch he saw and hit a hard ground ball that found its way all the way to the fence for a bases-clearing triple that took the Hornets from down a run to leading by a run in the final inning.

Calera actually got a great opportunity to answer in the home half of the seventh, looking to tie or walk off. A single from Alijah Franklin led off the bottom half of the inning, before two outs were recorded.

Like Chelsea, however, the Eagles strung together two walks from both Graham and Mason Blankenship to load the bases with two outs. Jaxon Butterworth then stepped to the plate with nowhere to be put, meaning the game would either end or a run would score to at least tie the contest.

Nolan Forehand forced the latter of those two options to happen. After a first-pitch ball, he rared back and fired the next pitch, which Butterworth flew to center field, but Horton stepped under the ball and caught it to preserve a 7-6 victory and get the Hornets out of the difficult final-inning jam.

That was thanks to three doubles in the first four at bats from Jacob Boyle, Horton and Frederick, the latter two of which drove in one run apiece. Later in the inning, Connor Ball laced a single to right field that drove in a third run, before Peacock scored on an error to put a fourth run on the board.

Those four runs were all the damage by either team through the first three innings until Chelsea added to its lead in the top of the fourth on an RBI-single from Boyle to put the Hornets up 5-0.

Calera was finally able to answer in the bottom half of the inning when Graham Blankenship drove a two-run single to left field scoring both Mason Blankenship and QuinDarius Crews to trim Chelsea’s lead to three runs.

With their confidence at a game-high, the Eagles came back to the plate an inning later red hot.

Calera started the inning off with a double from Kobe Prentice, a walk from Riley Gay and a single from Franklin to load the bases with no outs.

That was then followed by three consecutive outs, however, as Chelsea got out of the inning down one run.

Calera put at least two baserunners aboard in the final two innings, but never added another run, which allowed Chelsea to pull off the thrilling victory.

On the mound, Brock Hill got the start and pitched four innings. He allowed six hits and six runs, while striking out three. Jacob Tinnell and Forehand came in to relive Hill in that order and combined to allow just two more hits and no runs.

Calera was led by Crews, who was 1-for-3 with three RBIs and two runs scored. Graham Blankenship added two RBIs, while Franklin posted two hits.

On the mound, Matthew Bullard pitched the entire game and allowed 10 hits and seven runs, while striking out four.

By GRAHAM BROOKS / Staff Writer HELENA – Faced in a position where they needed to pick up an area... read more