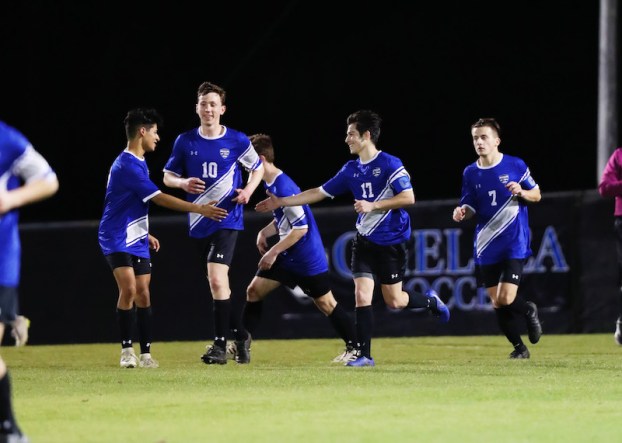 Chelsea’s boys soccer team pulled off a thrilling win against Pelham on Thursday, March 21, thanks to a sudden-death victory in PKs. (For the Reporter/Cari Dean)

PELHAM – The No. 5 Pelham Panthers and No. 14 Chelsea Hornets met on the pitch in a ranked area battle well into a chilly Thursday night on March 21, but after two overtime periods and a set of penalty kicks one last sudden death round finally separated the two, as Chelsea escaped with a much-needed 2-1 win over the Panthers.

“We blew a three-goal lead to Helena in our first area game so we were really disappointed in that,” said Hornets’ head coach Lee Miller. “So we knew our backs were against the wall and needed to pull a victory tonight. Pelham gave us all we wanted and it could’ve gone either way, so we’re very thankful to get the win in the end.”

When regulation time ended both teams were knotted at a goal apiece, but both scored early in the contest. Pelham (7-5-1, 1-1) scored quickly two minutes into play when a foul in the goalie box sent Irvin Rodriguez to the line.

Rodriguez’s shot careened off the right goal post to a teammate who sent the ball right back to Rodriguez. He caught the pass in stride and rifled his second shot into the net for a 1-0 lead.

Chelsea (8-7,1-1) followed soon thereafter, as the Panthers allowed the Hornets’ offense to hang around for far too long deep in their territory. In the 18th minute of the game, junior Andrew Messier took a poor clearance and blasted the ball into the right side of the net to tie the game.

Pelham mounted charges time and again in the first half, but the team’s accuracy was its downfall. The Panthers we only able to put five of their 11 first half attempts on goal, and the problem only worsened as the night went on.

A physical, foul-filled first half served as a harbinger of things to come as six yellow cards were handed out on the night. The teams’ familiarity with each other made things a little more than chippy, but also kept the score low.

The second half turned up more of the same, as the county foes continued to scrap and claw for every shot. The Panthers continued to suffer on their shot selection and only put two of their 8 shots on goal after halftime.

The Hornets, despite limited chances seemed to be able to manufacture more quality attempts, putting five of their seven attempts for the game on goal.

After the horn sounded on the second half, both overtime periods rendered the same result, which led to one final penalty kick round.

Both teams’ goalies blocked their initial shot, but gave up goals in each of their opponents’ attempts, forcing a sudden death scenario. Both team sent out an additional three shooters, but Chelsea only needed one.

Sophomore Matt Reinsch stepped up first and sent a beautiful shot into the upper left corner of the net leaving the game in goalkeeper Joseph Gage’s hands. Luis Garcia stepped to the line, and after taking a few steps back, lunged forward and pounded a shot towards the goal’s upper right corner.

Gage anticipated the move, however, and, leaping to the left, fully extended and knocked the shot away to seal the game.

“I felt left and he hit it right to where I was going,” Gage said after the save.

“He’s a three-year starter who didn’t really have a background in soccer. I actually recruited him out of a P.E. class when I saw him throwing Frisbees as a freshman,” Miller said of his goalkeeper. “I’m extremely thankful that he said ‘Sure, I’ll give it a try,’ because three years later he has improved an incredible amount, and I couldn’t be more proud of what he’s doing this year.”