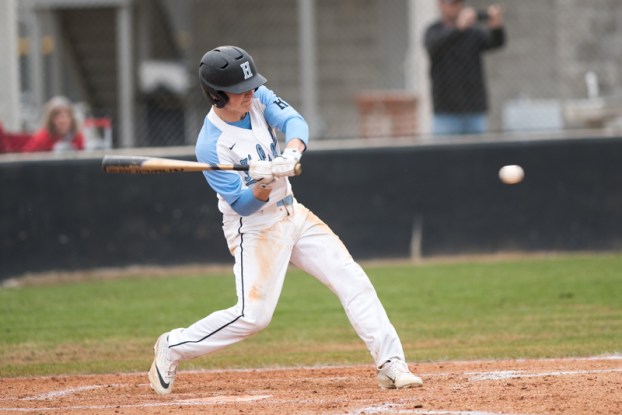 Helena scored 11 runs including eight runs in the bottom of the fourth inning to defeat Pelham 11-2 on Thursday, March 21. (Reporter Photo/Keith McCoy)

HELENA – Faced in a position where they needed to pick up an area win, the Helena Huskies varsity baseball team came through on its home field thanks to a stellar pitching performance from Will Griffith and a big fourth inning offensively to take down rival Pelham 11-2 on Thursday, March 21.

Despite giving up two earned runs in the top of the first inning, Griffith was spectacular on the mound for Helena, finishing with a complete game that included 10 strikeouts and just five hits allowed.

Pelham scored its two runs in the top of the first inning all with two outs as Griffith struck out two batters to start the game but then issued back-to-back walks.

Pelham took advantage of the free baserunners as Phillip Duke hit a two-RBI triple to score both runners to give the Panthers the 2-0 lead.

Following the first inning, it was all Helena the rest of the way.

In the bottom of the second inning, Helena’s Nick Thompson hit a one out triple and McGwire Turner followed with an RBI single to score the Huskies first run of the game.

A few batters later, John Stephen Heacock grounded into a fielder’s choice allowing Turner to score to tie the game. The final run of the inning came off a Pelham error that allowed Riley Marks to score to give Helena a 3-2 lead.

Two innings later, Helena put the game away as they batted around and collected eight runs in the bottom of the fourth inning.

Things got started with a Luke Stamba leadoff double, followed by two walks and a sacrifice bunt.

Thompson was Helena’s next batter as he hit into a fielder’s choice to score Wilburn, giving the Huskies a 7-2 lead with two outs.

Pelham was never able to climb back into the game as Griffith finished things off for Helena with a 1-2-3 seventh inning to get the complete game win.

At the plate, Moss and Griffith both led the way for Helena with two RBIs as Stamba led the Huskies with two hits.

By SETH HAGAN | For the Reporter PELHAM – The No. 5 Pelham Panthers and No. 14 Chelsea Hornets met on... read more