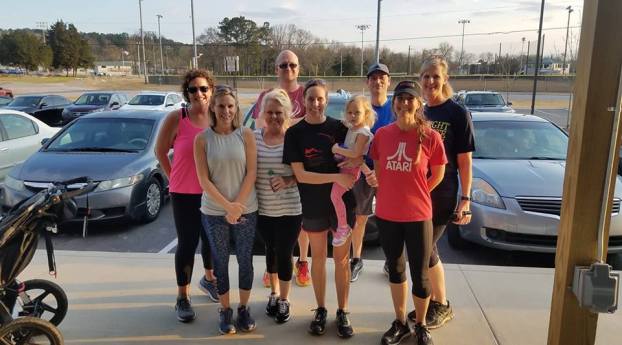 The Pelham Runners went on their first run on March 12. The group meets every Tuesday at 6 p.m. (Contributed)

PELHAM – After moving to Pelham in June 2018, Lisa Warren and her husband longed to find an active running group like the one they left behind in Augusta, Georgia.

“I joined a great group in Birmingham, but their runs are in downtown Birmingham and Homewood, and it was just really hard to fight traffic after work to get to Birmingham,” Warren said. “I needed something closer to home.”

That’s when Warren had the idea to start a local group called Pelham Runners. The group went on its first run on Tuesday, March 12. Warren said eight to 10 people showed up. About the same amount showed up the next week.

Right now, the group goes on a run every Tuesday at 6 p.m. They meet at the pavilion beside the Pelham Recreation Center and run a mapped route that is nearly 3 miles.

Warren said the group is open to runners of all levels, from beginners to advanced runners.

“It’s really important to me to not leave people behind during the run,” she said. “I do not want that to happen. We are very open to new runners and we want to be able to encourage those at all levels.”

Warren said she pairs people together who are at the same skill level.

“We have two people that walk and a couple of fast runners,” she said. “Most people fall somewhere in the middle. When a new person comes, I usually talk to them to see where they’re at and I pair them with someone who has run the course before and who is close to their skill level.”

The group is also stroller and pet friendly. Warren said she and her husband run with their 2-year-old daughter in her stroller and their dog. Pets must be on a leash.