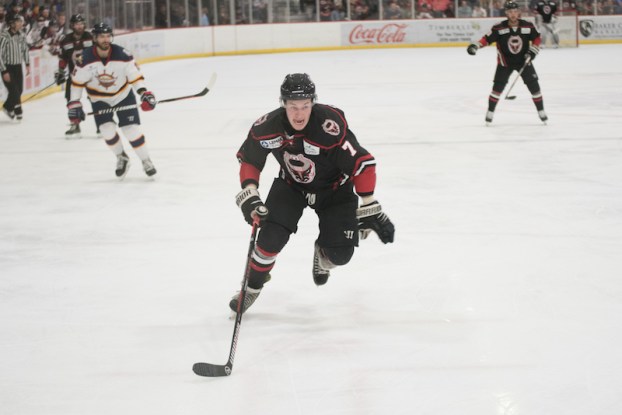 With four games left in the regular season, the Birmingham Bulls are coming off back-to-back series sweeps to maintain second place in the SPHL. (Reporter photo/Keith McCoy)

EVANSVILLE, Ind. – There are just two weeks left in the regular season and the Birmingham Bulls are catching fire at the right time thanks to four consecutive victories, including a weekend sweep of Evansville between Friday, March 22, and Saturday, March 23.

Now the Bulls will enter their final four games, all at home, on a four-game win streak looking to build up as much confidence as possible heading into the postseason.

Currently holding the No. 2 spot in the SPHL, the Bulls have an overall record of 36-14-2 for a total of 74 points, which is eight points behind first-place Peoria. Birmingham is also seven points ahead of third-place Huntsville, as the Bulls look to hold off their rival for the two seed, which would give them home ice in the playoffs unless they met Peoria in the championship.

A recap from each win against Evansville is below.

In the first game of the series, Birmingham came out with an aggressive nature thanks to a combined 28 shots through the first two periods of the game.

While the Bulls took a game-high 15 shots in the first period, they only connected on one. That one goal, however, was enough to give them the early lead as Craig Simchuk took the puck off assists from Austin Daae and Mike Crocock and buried it in the back of the net for a 1-0 advantage late in the opening period.

In the second period, the Bulls’ aggressiveness paid off a bit more thanks to three more goals on 13 shots to open up a 4-0 lead.

Daae was able to score the first goal of the period off an assist from Garrett Schmitz, which kick-started a span of three goals in less than six minutes.

Three minutes after Daae’s goal, Crocock benefited from clean movement and made it 3-0 on a goal with 7:25 left in the period. That was then followed by a goal from Mike Davis two minutes later off assists from Josh Harris and Matt Fuller for the 4-0 advantage.

Evansville got its first answer of the game with 1:52 to play in the second period to cut the deficit to 4-1 heading to the third.

In the final period, Evansville tried to create some momentum with a second goal in a row to make it 4-2 with 10:06 to play, but Birmingham bounced back with its best defense of the game, and with just less than four minutes remaining, Harris closed the game out with a fifth goal for the 5-2 win.

Birmingham’s defense gave up less than 10 shots in two of the three periods for a strong performance, while Sebastian Anderson saved 30 of 32 shots for the Bulls in goal.

In the second game of the series, Birmingham got off just one more shot than the Thunderbolts, but capitalized by scoring on three of those opportunities, while Mavric Parks kept Evansville from finding the net by saving all 33 of the shots he faced in a 3-0 shutout.

After a quiet first period, the Bulls struck 7:10 into the second period thanks to the duo of Jacob Barber and Harris. Barber hit Harris with a nice pass, which allowed Harris to bury the shot into the net for a 1-0 lead.

That 1-0 lead was all of the scoring through the first two periods in a tight defensive battle featuring flashy saves from each team.

It was a physical battle that carried over into the final period as well.

Birmingham held its 1-0 advantage with four minutes still left in the game when Cole Golka put the insurance goal into the back of the net for a 2-0 lead with 3:54 to play.

Evansville sent the goalkeeper Braeden Ostepchuk to the bench shortly after for the extra attacker to try and mount a late comeback, but instead, Crocock closed the game out with an empty-net goal for the 3-0 win.

Birmingham will now close the season out with a home series against Fayetteville this Friday and Saturday night March 29-30, with puck drop scheduled for 7:30 and 7, respectively.

The Bulls will then host Roanoke to close out the regular season on Friday and Saturday, April 5-6, with the same game times of 7:30 and 7 p.m.

By GRAHAM BROOKS / Staff Writer HELENA – Faced in a position where they needed to pick up an area... read more