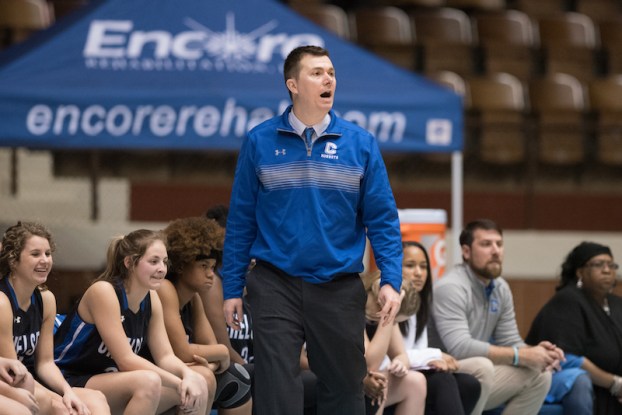 Chelsea girls basketball coach Jason Harlow has been named the 2018-19 girls’ basketball coach of the year in Shelby County after leading the Hornets to their first Sweet 16 since 2001. (File)

With half of the local girls’ basketball teams finishing above .500 this season, and several making deep playoff runs in 2019, it was tough to decide on the county’s coach of the year for the 2018-19 season.

The Shelby County Wildcats and Spain Park Jaguars both finished with 27-plus wins and a combined record of 56-9 thanks to great leadership from Ashley Phillips and back-to-back coach of the year winner Mike Chase, respectively.

The Wildcats advanced to the Sweet 16 where they lost just their second game of the season, while the Jaguars fell just short of their third straight trip to the Final Four with a loss to Hewitt-Trussville in the Elite Eight.

Both of those coaches were worthy of consideration as were the jobs of Beth Parmer at Oak Mountain, Crosby Morrison at Pelham and Lorie Kerley at Briarwood, all three of whom transformed their teams’ effort in their first year at the helm; while Westminster at Oak Mountain’s Dana Gache led her team to the Final Four for the second time in three years.

But one coach’s job went above and beyond anyone’s expectation.

Chelsea head coach Jason Harlow stepped into his role with the Hornets during the 2018-19 season looking to get his girls to buy in and simply try to improve their effort to start an upward trend, but his first season turned into much more than that earning him the 2019 Shelby County Coach of the Year award.

During the 2017-18 basketball season, Chelsea won all of three games and finished the season at 3-22 overall after losing their leading scorer Michaella Edwards to a season-ending knee injury during her junior season.

One year later, again without Edwards who moved to a prep school, the Hornets were under the leadership of Harlow looking to build more as a team with some experienced players back.

That on its own was a drastic turnaround, but to add to the special story, he and the team won the Class 6A Area 8 regular-season championship and tournament, before earning their first berth in the Sweet 16 since the 2001 basketball season.

In one season, Harlow was able to take Chelsea to a place it hadn’t seen in close to 20 years, and it was all because of the effort he got the girls to play with.

While there may have been more talented teams overall this season, I was hard-pressed to find one that worked harder on both ends of the floor.

It all started with their defense though. It was a defense that knew when to press and when to play back, but it was suffocating whether they picked you up as soon as the ball was inbounded or as soon as you brought the ball into the front court.

That presence led to fast break opportunities and plenty of offensive success, and despite being in several close games, the Hornets knew they could rely on the defense in big situations to help them pull out a key win.

Their energy of always moving and running to the ball was what made them as good as they were this year, and that all starts with the leadership of the coach and the girls to trust his coaching.

All of that fell into place, and led to a special season for the Hornets and a coach of the year honor for Harlow in year one.

By ALEC ETHEREDGE | Sports Editor The 2018-19 girls basketball season was a special ride for several teams. The Spain... read more