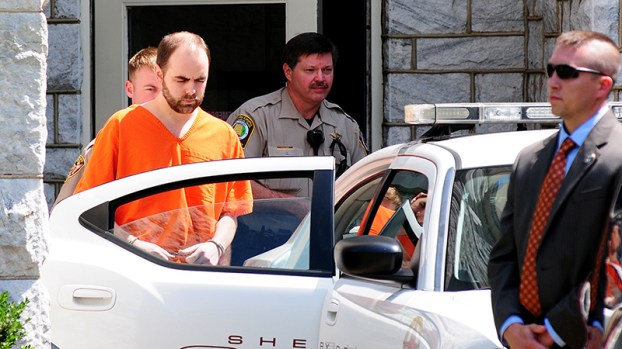 Bart Wayne Johnson is led into a Shelby County Sheriff’s Office patrol car in 2011 after he was sentenced to death for shooting and killing Pelham police officer Philip Davis. (File)

COLUMBIANA – A 39-year-old man who was sentenced to death for shooting and killing Pelham police officer Philip Davis in December 2009 is asking a Shelby County Circuit Court judge to “issue an order relieving (him) of his unconstitutionally obtained conviction and death sentence,” claiming his legal counsel was ineffective during his trial and appeals.

Bart Wayne Johnson, who is currently on death row at the Holman Correctional Facility in Atmore for the 2009 murder of Davis, an Alabaster resident, during a traffic stop on Interstate 65 in Pelham, issued a request for post-conviction relief in Shelby County Circuit Court in late February.

Davis is the only Pelham police officer ever killed in the line of duty.

In the request, Johnson asked to be provided an attorney and “funds sufficient to present witnesses, experts and other evidence in support of the allegations contained in this petition,” and asked for a “full evidentiary hearing” and an order overturning his conviction and death sentence following the hearing.

A jury found Johnson guilty in 2011, and retired Shelby County Circuit Court Judge Al Crowson sentenced him to death by lethal injection. In 2014, the Alabama Court of Criminal Appeals affirmed Johnson’s conviction, and the Alabama Supreme Court declined to review the case in 2015.

Johnson claimed he received ineffective legal counsel during his trial and appeal.

“The lack of an adequate investigation by trial counsel and their deficient performance resulted in Mr. Johnson’s conviction and subsequent death sentence,” read his request. “Had trial counsel adequately prepared for trial, made reasonable decisions during jury selection and formulated a coherent theory of defense that was consistent across both phases of the capital trial, Mr. Johnson would not have been convicted of capital murder and sentenced to death.”

As of March 25, no ruling had been made on Johnson’s request. Circuit Court Judge William Bostick, who was a prosecutor with the Shelby County District Attorney’s Office during Johnson’s trial, has recused himself from the case.

Cool nights, mild days on tap in this week’s weather

By NEAL WAGNER / Managing Editor After some potentially severe weather in Shelby County on Monday, March 25, the area... read more