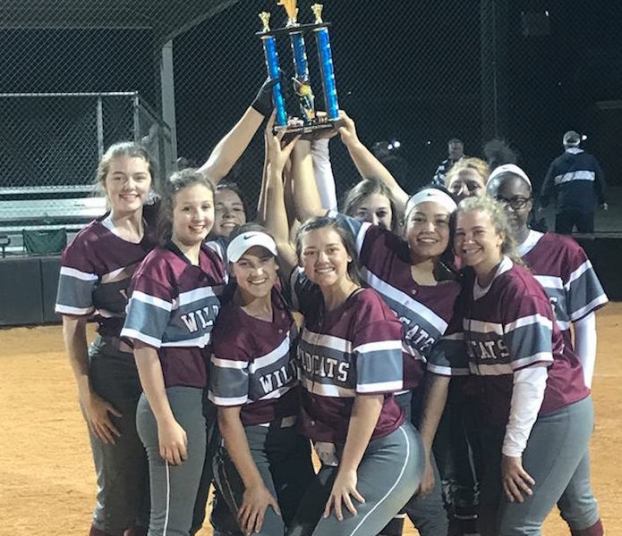 The Shelby County softball team recovered from losing its opening two games of the Piedmont Invitational by winning five in a row to claim the championship. (Contributed)

OXFORD – With a big season expected for the Shelby County Wildcats’ softball team, the 3-3 start they got off to through their first six games of the season wasn’t exactly what they had hoped for, but during the Piedmont Invitational at Choccolocco Park in Oxford between Friday, March 22, and Saturday, March 23, the Wildcats flipped a switch.

Through the first two games, it was more disappointment for Shelby County, who lost to St. Clair County 6-5 and Jacksonville 5-4 to open the tournament with two consecutive one-run losses.

With those two pool-play losses on the opening night, Shelby County came back the next morning and had to dig out of a hole as one of the lower seeds in the tournament.

In single elimination format, the Wildcats took down host Piedmont to start the day by a final score of 9-4, before then reeling off two more wins in a row by final scores of 6-4 against Lingoln and 10-4 against Cleburne to earn a rematch in the championship game against St. Clair County.

Like they had done throughout the day, Shelby County was forced to dig out of a hole. Trailing 5-3 through three innings of play, the Wildcats started to click again and outscored St. Clair 7-1 the rest of the way to pick up a 10-6 victory and the tournament title.

Early in the game, Shelby County was able to capitalize on opportunities to grab the first lead.

Lead-off singles from Peri Clark and Maggie West quickly put two baserunners aboard. Nataley Whitner was then hit by a pitch to load the bases before an out was recorded.

The scoring started when an error and a wild pitch allowed both West and Whitner to cross the plate for a 2-0 lead.

St. Clair County, however, used two doubles, a single and a walk to bring home four runs in the bottom half of the inning to steal the lead at 4-2.

In the top of the third, the Wildcats cut the deficit to a run when Halia O’Leary singled to left field to drive home Whitner.

St. Clair answered again in the bottom half of the inning on an RBI single of its own to retake a two-run lead at 5-3.

From that point forward, however, Shelby County couldn’t be stopped.

In the top of the fourth, the Wildcats used a hit batter and walk to lead off the inning, before a sac fly brought home Clark. An error on a ground ball from West then allowed the game-tying run to cross the plate.

Then, Shelby County grabbed the lead again for the first time since the top of the first when Whitner lined a ball to center field that got down for a double and drove in two runs for a 6-5 advantage.

While the Saints came back to tie the game in the bottom half of the inning, they never saw the lead again.

In the top of the sixth, the Wildcats got a much-needed explosive inning to put the game away.

An error, followed by back-to-back singles from West and Whitner allowed for the go-ahead run to cross the plate for a 7-6 advantage.

That was followed by a walk to load the bases, before Madison Purcell stepped to the plate and drove home two runners with a two-RBI double. After an out was recorded, a fielder’s choice allowed the 10th and final run of the game to cross the plate for the Wildcats.

Leading 10-6, Shelby County was able to stave off two baserunners in the bottom of the sixth by picking up a double play and a game-ending pop out to preserve the championship win.

Clark and O’Leary each added hits in the game as well as one RBI apiece, while Aleah Reed also had an RBI.

Cayden Rachels got the complete-game victory in the circle to play a part in the title win as well.

Chelsea completes sweep of Calera thanks to late triple

By ALEC ETHEREDGE | Sports Editor  CALERA – Down to their final strike, trailing 6-5, the Chelsea Hornets were facing... read more