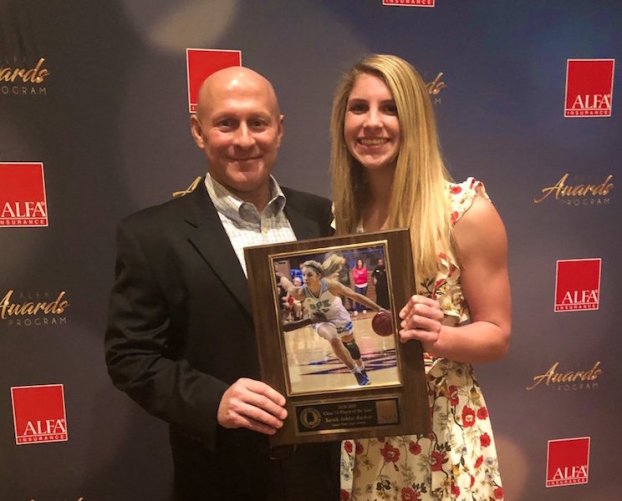 Spain Park’s Sarah Ashlee Barker was named to the Super All-State team, as well as the Class 7A Player of the Year on Tuesday, March 26, at the Mr. and Miss Basketball awards banquet. (Contributed)

Barker named to Super All-State team, Class 7A Player of the Year

MONTGOMERY – A night after being named locally as the best girls basketball player in Shelby County, Sarah Ahslee Barker was honored again at the 2019 Mr. and Miss Basketball Banquet held at Montgomery’s Renaissance Hotel on Tuesday, March 26.

In her three years as a starter with the Jaguars, Barker has helped lead the team to three consecutive berths in the Elite Eight, two final four appearances and one state championship.

Barker, who had to overcome a major knee injury during her eighth-grade year before ever playing for the Jags, has accomplished a ton in her three years at Spain Park, and in the last two alone has set a high bar.

As a sophomore, she only averaged 9.2 points per game, but also posted 7.8 rebounds and 3.3 blocks per game. Those were almost double-double numbers as a sophomore, not to mention a blocks per game average that is hard for the tallest centers in the game to reach as seniors in high school.

During Spain Park’s playoff run that season, she posted double-digit points in every game, and was also a rebound shy of a double-double in every game, but her effort was key in leading the Jaguars to a state championship to cap off the special year.

As a leader on the floor, she knows she has to make her teammates better, and she did that this season despite a loss in the Elite Eight to Hewitt-Trussville.

Barker was close to averaging a double-double this season as well, but in more dominant fashion with 20.2 points and 9. 5 rebounds per game.

She also posted 2.5 assists, 2.3 steals and 1.1 blocks per game, showing her brilliance all over the floor.

Now, as Barker heads into her senior year with Spain Park, she’ll not only be the best returning player in the state, but she’ll have redemption on her mind, as she looks to use her leadership of the team to take them back to the Final Four for the third time in four years after this year’s heartbreaking ending.

Coosa Valley holds on for 6-5 win against Tuscaloosa Academy

By ALEC ETHEREDGE | Sports Editor TUSCALOOSA – After a 2-2 record during a spring break tournament in Florida, the Coosa... read more