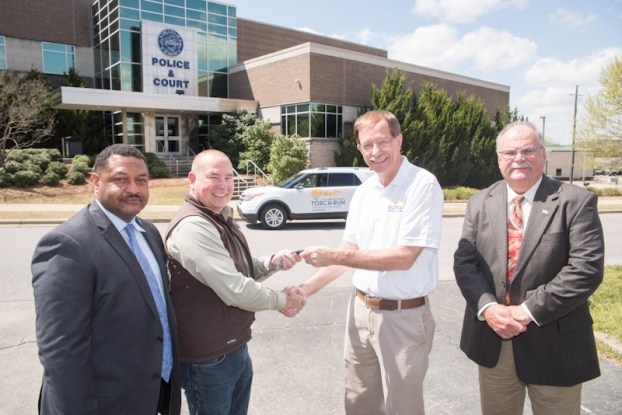 PELHAM — The Alabama Law Enforcement Torch Run received a donation of a 2014 Ford Explorer on March 25 as part of a partnership between Colonial Pipeline and the Pelham and Birmingham police departments.

The Alabama Law Enforcement Torch Run is an organization that partners with law enforcement agencies with a mission “to raise awareness and funds for the Special Olympics movement,” according to its website.

According to PPD Community Relations Coordinator Ainsley Allison, the donation was needed because “the old 2005 Tahoe we were using had a ton of miles. We take the vehicle all over the state to raise awareness about Special Olympics Alabama.”

The new vehicle serves as an advertisement for the organization. Torch Run Alabama representative Bob Coups is responsible for driving it around the state to meet with people to spread awareness.

“Those who know of the Torch Run are familiar with the car,” Coups said. “It gives me an automatic in with them to talk about it.”

The group raises funds each year through a variety of events including the “Polar Plunge,” “Autobahn Chase A Cop”  and the actual Torch Run event, which takes place in different cities leading up to the Special Olympics opening ceremony.

Every year, the organization raises more than $120,000 for the Special Olympics, which underscores the importance of being able to travel and spread awareness throughout the state.

More information about the Torch Run and Special Olympics events can be found at Altorchrun.com.