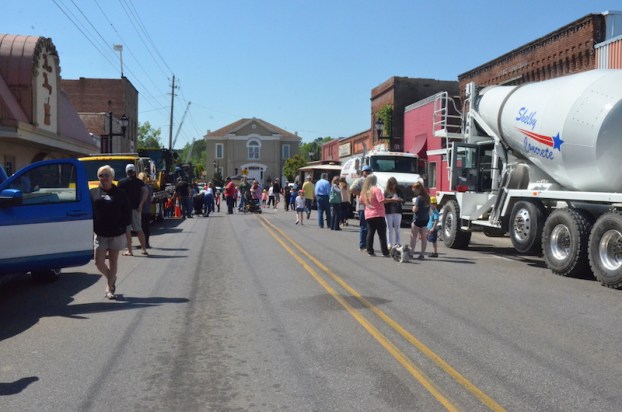 Children can get an up-close look at fire trucks, construction vehicles and more at the third annual Touch a Truck event April 13 in Columbiana. (File)

Fire trucks, construction vehicles, race cars and even more exciting vehicles than these will be just a little of what can be expected at the third annual Touch a Truck event in Columbiana on April 13.

Touch a Truck is a free community event for all ages hosted by Kyle Mims, Columbiana’s Edward Jones financial advisor. He and his branch office administrator, Debra Hayes, in cooperation with the Columbiana Main Street board, bring machines and vehicles of all kinds to Main Street every year to give families the opportunity to have some quality time together in a way that keeps them from having to break the bank to do it.

Kids and parents alike will love the chance to get an up close and personal look at all kinds of vehicles that normally only the professionals have access to. Other than the city’s first responder vehicles, there will be tractors, dump trucks and the Columbiana trolley. There will also be a number of new “surprise” machines that Mims has been able to book for this year.

From the traffic light at College and Main streets, to just beyond the traffic circle where the fire department is located, the exhibits will be spaced out in a way that will allow everyone plenty of time at each vehicle and still keep the crowd moving from 9 a.m.-12 p.m.

“I grew up with a dad in the construction business, and I got to operate a lot of this kind of  equipment when I was a kid,” Mims said as he spoke of his inspiration for the event.  “Even now I am usually in overalls and riding on a tractor during the weekends.”

Mims has partnered with several local companies and businesses to bring Touch a Truck to Columbiana. Alabama Power, Thompson CAT, Chilton Contractors, Shelby Concrete, Howard Tire and Tred Wear all play a part in bringing the vehicles to Main Street. He also works with the city’s first responders and the Shelby County Sheriff’s Office to make sure the kids see everyday heroes during their morning out too.

When asked what his hopes were for the event, Mims said, “Ultimately this is just a way to give back in the community we serve. We always want it to be family friendly, free and an opportunity to just come hang out together.”