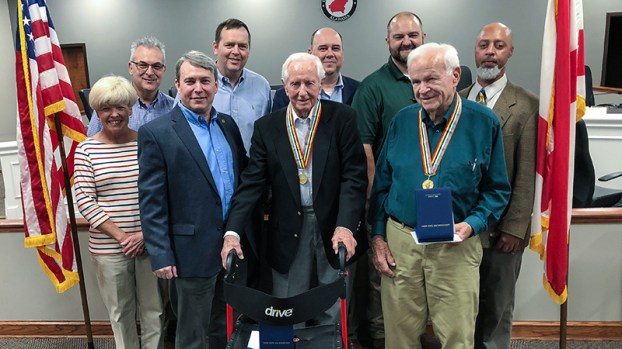 COLUMBIANA – Now in his mid-90s, Shelby County resident and Korean War veteran Eugene Grady wouldn’t hesitate to volunteer again to serve his nation in the Armed Forces if the need should arise.

“I also fought in World War II aboard the USS Kitty Hawk in the South Pacific for 33 months, and if I was called back today and it looked like we may be in war, I would volunteer again,” Grady told the crowd gathered at the Shelby County Commission meeting on the evening of March 25.

Grady joined fellow local veteran William Bradford in being recognized by the Republic of Korea’s Ministry of Patriots and Veterans Affairs during the meeting for their service during the Korean War.

During the meeting, Shelby County Community Services Manager Reggie Holloway presented Korean Ambassador for Peace War Veteran Medals to Grady and Bradford, and read proclamations from the Ministry of Patriots and Veterans Affairs in the two veterans’ honor.

“It is a great honor and pleasure to express the everlasting gratitude of the Republic of Korea and our people for the service you and your countrymen have performed in restoring and preserving our freedom and democracy,” Holloway said while reading the proclamations. “We cherish in our hearts the memory of your valiant sacrifices in helping us reestablish our free nation. In grateful recognition of your dedicated contributions, it is our privilege to proclaim you an ambassador for peace. With every good wish of the people of the Republic of Korea, let each of us reaffirm our mutual respect and friendship that they may endure for generations to come.”

Bradford said he was honored to have a chance to serve his country in the war.

“I just want to say that the work that we did in Korea was something I’m proud of,” Bradford said. “I was 19 years old when I went, and I’m proud of it.”

By ALEC ETHEREDGE | Sports Editor The 2018-19 girls basketball season was a special ride for several teams. The Spain... read more