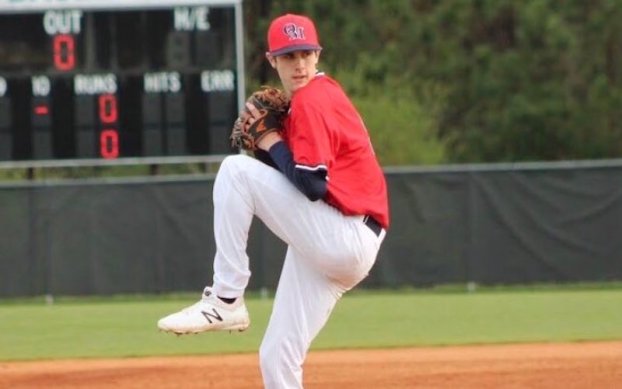 The Oak Mountain Eagles went 3-1 at the 2019 Gulf Coast Classic with a 2-1 loss to Spanish Fort being their only blemish during the tournament. (Contributed)

While they went into the Gulf Coast Classic hoping for a championship, the Oak Mountain Eagles put together an impressive 3-1 record at the spring break tournament with three big wins before a one-run loss to prevent them from being one of the four semifinal teams.

That loss came to Spanish Fort in a 2-1 game, which is nothing the Eagles will hang their heads about with an important area series with Thompson on the horizon. Plus, the Eagles are now 20-4 overall this season, and now all four losses have come by three runs or less.

This team is good, and a loss to Spanish Fort won’t deter this team’s effort moving forward, nor will it take away from the three big wins in the tournament. A recap from each of their games at the tournament is below.

Oak Mountain’s opener in the tournament may have been the most thrilling thanks to a nine-inning marathon that ended when Luke Percer hit a walk-off single to right field to score Jake Rivers for the 3-2 victory in the bottom of the ninth.

The threat started with a leadoff walk from Rivers to start the inning. After an out was recorded, Jack Wilson singled to right field, before Percer stepped to the plate and laced his game-winning one-out single.

The action started in the second inning when both teams picked up runs for a 1-1 tie. That was followed by a couple of scoreless innings before Oak Mountain took the lead in the bottom of the fifth, thanks again to Percer.

He striped a hit to left field that ended with him picking up a triple and driving in one run for a 2-1 advantage.

Etowah, however, answered back quickly in the top of the sixth due to some errors allowing one run to cross the plate for the 2-2 tie.

That was all of the scoring until Percer’s second big hit of the game in the ninth to win it.

Percer and Wilson were the only two hitters to pick up multiple hits in the game and combined for five of the team’s seven hits and all three of their RBIs.

Rivers got the start on the mound and tossed six innings allowing three hits and two runs while striking out seven. Hunter Hall pitched the final three innings and struck out three while allowing just one hit.

The Eagles got more late-inning success in the second game of the tournament with three runs in the bottom of the sixth to pull off a second win in a row.

Oak Mountain started the scoring in the bottom of the second with an RBI single from Wilson to take the early 1-0 lead.

In the top of the fourth, Normal West stole the lead away thanks to a triple, double and single driving in two runs to push them in front.

Jackson Kimbrell, however, was quick with an answer when he blasted a two-run home run over the right-field in the bottom of the fourth to steal the lead back at 3-2.

Yet again, that was quickly answered in the top of the fifth when Normal West tied the game at 3-3, but the Eagles got the final laugh in the back-and-forth game.

In the bottom of the sixth, a single from Percer was followed by a triple from Kimbrell to quickly take the 4-3 lead. That was followed by a fielder’s choice that allowed Kimbrell to score. Then a two-out rally saw a third run cross the plate when Dylan Fraser drove home Caleb Ragland for the 6-3 lead.

Then, Hansen McCown stepped to the mound in the top of the seventh to complete his incredible performance on the mound for the victory.

McCown tossed the complete game and allowed seven hits and three runs while striking out 10 of the 28 batters he faced.

At the plate, Kimbrell went 3-for-4 with three RBIs and two runs scored. Ragland also went 3-for-4, while Landon Cato and Turner Hughes each had two hits.

Oak Mountain made quick work of Richmond-Burton thanks to scoring all 16 of its runs in a 16-2 win in the first three innings of the game.

Hughes got the start and tossed all five innings allowing six hits and two runs while striking out eight in a shortened game.

At the plate, Hall finished a home run shy of the cycle after going 3-for-3 with a single, double and triple, leading to five RBIs. Percer went 3-for-3 in the game with three RBIs, while Ryan Reuse went 2-for-2 with three RBIs. Cato also had two hits in the game and scored twice.

Kimbrell tossed a complete game allowing just six hits and two runs while striking out 10 batters, but the two runs allowed became one too many.

Both teams went scoreless in the first three innings of a pitching battle, but the scoring broke open in the top of the fourth when Percer hit an RBI single for the 1-0 lead.

Spanish Fort, however, answered with a two-out RBI single in the bottom half of the inning to tie it. An inning later, a balk by Kimbrell on the mound allowed the Toros to take the lead at 2-1 with a run for the second inning in a row.

That became the difference, as the Eagles were unable to bring home three baserunners the remainder of the game.