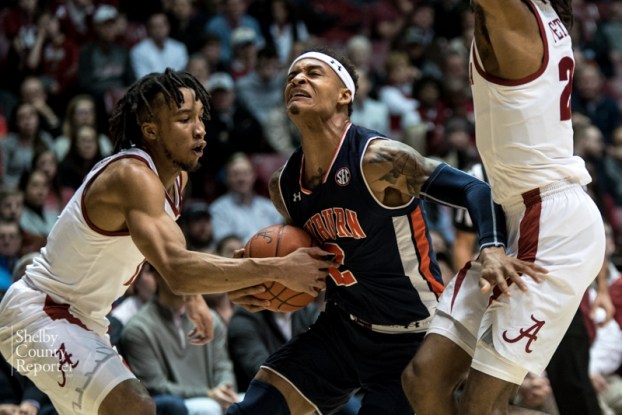 Bryce Brown, above in a game against Alabama earlier this year, caught fire and posted 24 points to help lead the Auburn Tigers to their first Final Four appearance in school history. (Reporter photo/Keith McCoy)

KANSAS CITY, Mo. – When we saw Bruce Pearl’s tears following Chuma Okeke’s ACL tear in an upending of No. 1 seed North Carolina in the Sweet 16 to earn a trip to the Elite 8, you saw the passion Auburn basketball had, and when Okeke showed up at halftime of an Elite 8 game against No. 2 seed Kentucky to show support for his team, you knew the Tigers would put together a second half for the ages in an attempt at a spot in the Final Four.

Trailing 35-30 at the half, that’s exactly what Auburn was able to do, as the Tigers battled back to take the lead early in the half before playing with the advantage for the majority of the half.

Okeke’s presence combined with the passion of Auburn basketball this season, was an extra lift Kentucky had trouble handling.

The Wildcats used their natural talent and ability to fight back and force overtime with a 60-60 tie at the end of regulation, but Auburn stormed out in front in OT and didn’t look in the rearview mirror once as they drove straight into their first Final Four in school history with a 77-71 victory.

If you don’t believe Auburn has something different this year, the Tigers won four games in a row to claim the SEC Championship, then took down New Mexico State in a one-point victory to kick off the NCAA Tournament, before taking down three blue bloods of the sport.

Auburn, who had never been to one Final Four, just took down all three of those teams on their way to their first trip to the Final Four in school history.

One of those players on the Tigers’ basketball team headed to the Final Four with his teammates will be former Spain Park basketball standout Austin Wiley.

The Auburn center has battled through injury and being held out for precautions as part of a major basketball investigation last year, but nonetheless, Wiley stood by his team and is finally gaining some steam with the team.

Wiley posted seven points and two rebounds in 14 minutes of action making three of his six field goals and one of his two free throws. On a team that likes to shoot 3-pointers, that’s not a bad stat line for the big guy whatsoever, as his presence in the paint seemed to affect the Wildcats during his time on the floor. 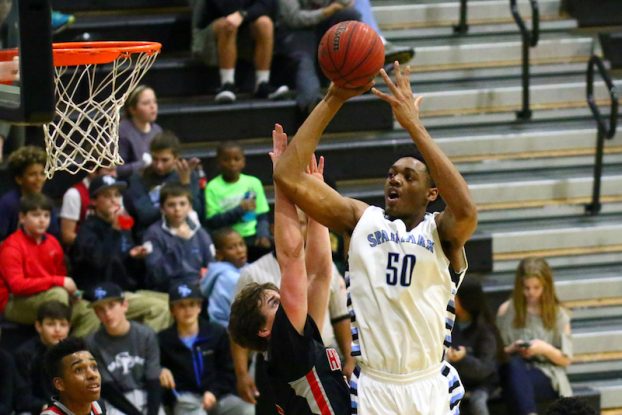 At Spain Park, Wiley led the Jaguars to the Class 7A state championship game as a junior and was a three-time All-State first-team selection. He averaged 22 points and 12 rebounds as a junior, and then 27.1 points, 12.1 rebounds and 2.9 blocks per game as a senior. He was a four-year starter with the Jags and averaged a double-double in every season he was there.

During the Elite Eight victory, it was the duo of Jared Harper and Bryce Brown, however, that took over the game.

After a scoreless first eight minutes to the game, those two combined for 50 points with Harper scoring 26 and Brown 24.

For a while, Brown was unconscious shooting the ball and he finished the game 8-12 from the field, 4-7 from beyond the arc and 4-5 from the free throw line, while also contributing three steals.

Harper’s performance was jaw-dropping considering the moment. He went out and went 11-11 from the free throw line, while shooting 7-18 from the field and posting five assists, four rebounds, three steals and two blocks.

In Auburn’s last two games, the Tigers have outscored North Carolina and Kentucky by a combined 86-66 in the second half to pull off comebacks against impressive teams.

It’s just part of what has made this team’s run special, and now down one of their leaders, the Tigers will continue to carry a special presence into the Final Four that it will be tough for any team to match.

By ALEC ETHEREDGE | Sports Editor While they went into the Gulf Coast Classic hoping for a championship, the Oak... read more