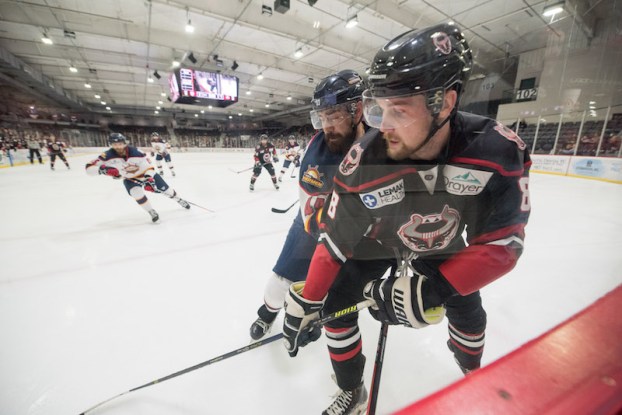 The Birmingham Bulls swept Fayetteville with wins of 5-0 and 5-2 to lock up the No. 2 overall seed heading into the SPHL playoffs in a couple of weeks. (Reporter photo/Keith McCoy)

PELHAM – Winners of six in a row following a weekend sweep of Fayetteville, the Birmingham Bulls are not only on a roll at the right time of the season as the postseason nears, but they have locked up the No. 2 overall seed in the upcoming SPHSL playoffs.

The Bulls swept Fayetteville with wins of 5-0 and 5-2 to improve to 38-14-2 overall this season and earn the two seed in the league, as they’ll get to choose who they want to play in the first round of the playoffs after league-leading Peoria picks its opponent.

Before the playoffs get here, however, Birmingham will have two home games against Roanoke with a game on Friday, April 5, at 7:30 p.m. and Saturday, April 6, at 7 p.m.

A recap from each of the Bulls’ wins against Fayetteville is below.

In the opener of the series, Birmingham started an aggressive weekend by totaling 39 shots and limiting the Marksmen to just 25 shots, including just seven in both the second and third periods.

In the opening period of the game, both teams totaled 11 shots, but it was Birmingham that capitalized offensively with two goals, while Mavric Parks started off a great game in goal saving all 11 of the shots he faced.

The Bulls struck with their first goal just 44 seconds into the game to set the tone early when Josh Harris drilled a shot into the back of the net following assists from Matt Fuller and Mike Davis.

That was all of the scoring for the next 16 minutes, but with 3:16 remaining in the period, Jacob Barber took some great passes from Harris and Fuller and fired a shot into the goal for a 2-0 lead at the end of the period.

In the second period, Birmingham did everything it needed to in order to close the game out starting with an unassisted goal from Davis 1:27 into the period to put the Bulls on top 3-0.

Shortly after, Shane Topf added a goal off assists from Taylor Dickin and Joe Tolles to make it 4-0. The fifth-and-final goal came in the final seconds of the contest when Cole Golka found an opening to bring the game to its final score of 5-0.

Harris led the team with three points in the win, while Fuller and Davis both had two points. Parks saved all 25 of the shots he faced in the game.

Despite falling behind 1-0 3:15 into the second game of the series, the Bulls used one of their best power-play performances of the season to comeback and pull off a rather easy 5-2 win.

Just after Tyler Palmer put the Marksmen up 1-0, the Bulls went on the power play and took advantage when Harris left a pass for Geoff Crisfield, who put the puck in the back of the net for a goal and a 1-0 lead.

It took less than three minutes to add two more goals, as 31 seconds later Cole Golka put one in the back of the net, and then with 11:36 left in the period, Garrett Schmitz added another power-play goal to put Birmingham on top 3-1 at the end of the opening period.

Then, the Bulls got a big goal when Geoff Crisfield scored with 53 seconds to play in the second period to put the Bulls up 4-1 heading to the final period.

In the third, Birmingham quickly capitalized on another power-play opportunity when Russell Jordan took passes from Golka and Fuller before drilling a shot that put the Bulls on top 5-1 and made them 3-6 on the power play.

Brian Bowen added a power-play goal for Fayetteville shortly after, but the final 10 minutes went by scoreless preserving Birmingham’s win.

Crisfield posted three points in the win with two goals and an assist, while Harris, Schmitz and Golka added two points apiece.

Parks saved 29 of the 31 shots he faced, one of which was a short-handed power-play goal.