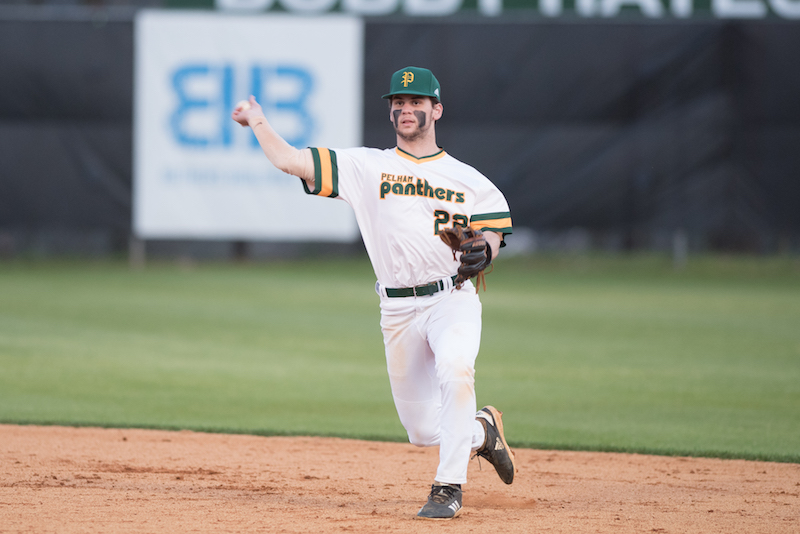 The Pelham Panthers competed in the IMG National Classic during spring break and competed against some of the best baseball teams in the country. (File)

BRADENTON, Fla. – The Pelham Panthers traded in the views of Birmingham for the beautiful views of the Florida Gulf Coast during the week of spring break to take part in the IMG National Classic in Bradenton, Florida.

While the Panthers went 2-2 in the tournament, their two losses were to good teams, including national power and host team IMG Academy, while their wins came against Redan High School from Georgia and Florida Christian Academy.

That win against Redan started the week off on a positive note, and while it inevitably set up a matchup with IMG, it gave the Panthers some confidence by picking up a big win and proved they could compete against the best teams moving into key area games over the next few weeks.

Whether it be the excitement of spring break at the beach or being on the baseball field in general, the Panthers came out ready to go against Redan and put up eight runs in the first two innings, which led to the dominant final score of 9-3.

In the top of the first, Pelham started its strong offensive attack with three runs.

With one out in the inning, Phillip Duke singled on a bunt to put a runner on first. He then advanced to second on an error by the pitcher.

That extra base became irrelevant, however, when Kasey Clark hit a ball to the right field wall that not only brought Duke home, but allowed himself to leg out a triple.

Getting to third was big because during Hunter Stowe’s at bat, Clark was able to score on an error by the catcher, which allowed the Panthers to go up 2-0.

That lead became 3-0 with a two-out RBI single from Kyle Camlic a few batters later to close out a strong top half of the first.

After a triple of its own to lead off the bottom of the first, Redan answered with a sac fly to put one run on the board, but that wasn’t nearly enough to answer the three by the Panthers.

That lack of answering early became big in the top of the second when Pelham posted five more runs.

It all started with a double from Jackson Weaver and a single from Cody Ferguson to put runners on the corners with no outs. A double steal then not only put Ferguson on second, but brought Weaver across the plate for a 4-1 advantage.

Following the first out of the inning, three straight batters were hit by pitches for Pelham, which allowed two more runs to score. With the bases still loaded, Camlic stepped to the plate and doubled to center field to bring home two more runs for an 8-1 lead through two innings of play.

That was more than enough help for Clark on the mound, who had an impressive outing. He picked up a complete-game win allowing eight hits and three runs while striking out eight.

Pelham didn’t score again until the top of the seventh on an RBI double from Duke, but Clark’s performance on the mound was also consistent as he didn’t allow a run after the first inning until the bottom of the seventh. By then, Redan’s deficit was too large.

To close out the tournament, Pelham took advantage of a five-run third inning against Florida Christian to end things with a 9-7 victory, despite getting outhit 12-11.

The Panthers took a 7-1 lead through four innings, before Florida Christian put six combined runs on the board in the fifth and sixth innings.

Luckily for the Panthers, they added two runs in the bottom of the fifth to make the difference in the final score and stave off the comeback effort.

Ferguson went 3-for-4 at the plate with two RBIs in the win, while Stowe and Adam Camlic went 2-for-3. Stowe, Clark, Reid and Meddick all had at least one RBI.