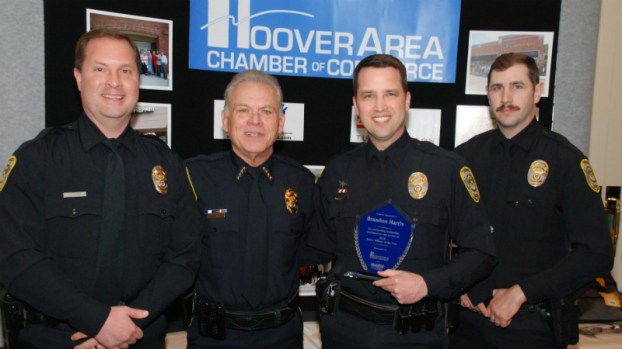 Brandon Harris, third from left, was named the Officer of the Year at the Hoover Area Chamber of Commerce luncheon on Thursday, March 21. Harris is pictured with Hoover Police Department Chief Nick Derzis, second from left, and fellow award nominees Cyle Cutcliff and Chad Logan. (CONTRIBUTED)

Hoover Fire Department Chief Clay Bentley was the first to present awards for members of his department, and Bentley said the awards were based on character and work ethic, not just a “single act of heroism.”

Stephen Finlen was named the Firefighter of the Year.

Finlen started with the department in 2014 and works at Station 8 in Greystone, Bentley said. Finlen oversees the HFD self-contained breathing apparatus program, including saving the city thousands of dollars as he can perform maintenance on the equipment and train fellow firefighters—all of which Finlen does for no extra pay.

“The SCBA is a lifeline for our firefighters when they’re working in a dangerous environment,” Bentley said.

Retired Capt. Rusty Lowe was named Paramedic of the Year.

Lowe was a firefighter for more than 30 years, Bentley said.

“Rusty is an awesome leader,” he said. “He’s been credited with saving countless lives over the years.”

One such incident was at the 2018 Southeastern Conference Baseball Tournament. There were reports of a police officer in distress, and Lowe found the officer in cardiac arrest and helped save him.

“I think this is just a good example of how our city works together each day,” Bentley said.

Hoover Police Department Chief Nick Derzis then announced the awards for his department.

Willie Young was named Detention Officer of the Year, as Derzis recounted incidents in which Young helped confiscate dangerous items from inmates.

“Willie does a fantastic job,” Derzis said. “We’re proud to have him.”

Brandon Harris was named Officer of the Year.

Derzis noted Harris’ work with a teenaged victim of a sex crime. The teen’s youth pastor was discovered to be the perpetrator.

Harris worked closely and compassionately with the victim’s family, Derzis said, and the investigation uncovered other victims and led to an arrest and subsequent conviction.

“They can begin the recovery process thanks to the work of Detective Harris,” Derzis said and stressed the difficulty of investigation such cases for officers.

Other nominees for the award were Cyle Cutcliff and Chad Logan.

Amy Appleton was announced as the 911 Dispatcher by Linda Moore, who oversees the Hoover 911 Center.

Moore said Appleton stepped in to help during the Galleria mall shootings in 2018.

“Working the police radio, as you might imagine, became a stressful situation,” Moore said. “Supervisor Appleton was a vital link in the chain of emergency response in our city.”

By EMILY SPARACINO / Staff Writer MONTEVALLO – Vietnam War veterans were honored for their service in a commemoration ceremony... read more