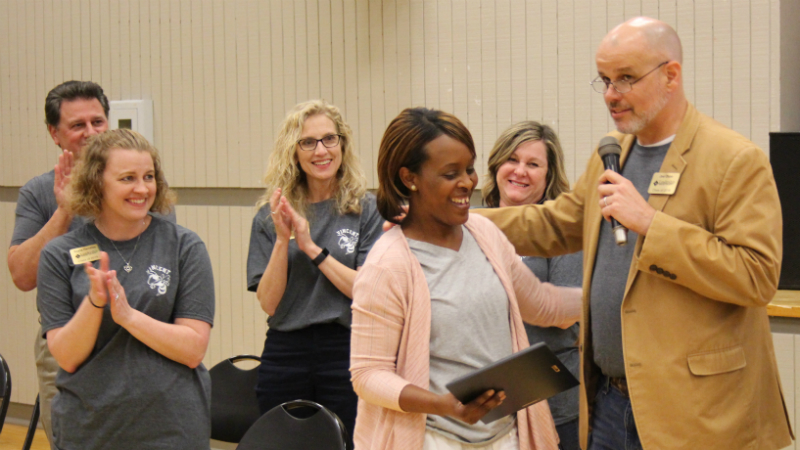 Angela Mitchell is announced as the first inductee of the Vincent Hall of Heroes by former Vincent Middle-High School Principal Joel Dixon during a ceremony on Thursday, March 21. (REPORTER PHOTO/STEPHEN DAWKINS)

VINCENT – Fifth grade teacher Angela Mitchell became the first inductee of the Vincent Hall of Heroes at a special ceremony on Thursday, March 21.

Hall of Heroes is a Leadership Shelby County group project, and is intended to serve as a “visual tribute to the spirit of the Vincent community,” group member and Alabaster City Councilman Russell Bedsole said.

“This Hall of Heroes is in honor of all those who offer their courage, strength and self-sacrifice in the service of others who often may never know them by name but will reap the benefits of their hard work,” Bedsole said. “The creation of this Hall is a symbolic reminder to never forget what makes this community so great.”

All of the fifth grade students at Vincent Elementary School were tasked with nominating people for the honor. The students composed 69 essays describing those in their community they considered heroes.

“We challenged them to expand their imagination and to thoroughly ponder what or who they thought was a hero,” Bedsole said. “Was a hero to them someone who was a first responder or maybe a school teacher or their principal? Perhaps a hero is a successful business executive who climbed the corporate ladder to success. Or how about this: Could a hero be the school custodian or maybe the maintenance man who does his or her job with such professionalism and dedication that by simply doing their craft they make a lasting impact on a student’s life?”

The five finalists were McGuinnis, Mitchell, Perkins, Schiller and Wills.

During the ceremony, a five students read part of their nomination essays, and then Mitchell was announced as the inaugural inductee.

Below are excerpts from essays about Mitchell:

A plaque honoring Mitchell will be placed at VES to inspire students.

Hall of Heroes organizers said they plan for the initiative to be an annual occurrence and hope it is replicated in other communities in Shelby County.

“Young people need to have a spotlight drawn to that and know their time is coming,” Shelby County Schools Human Resources Supervisor and former VMHS Principal Joel Dixon said.