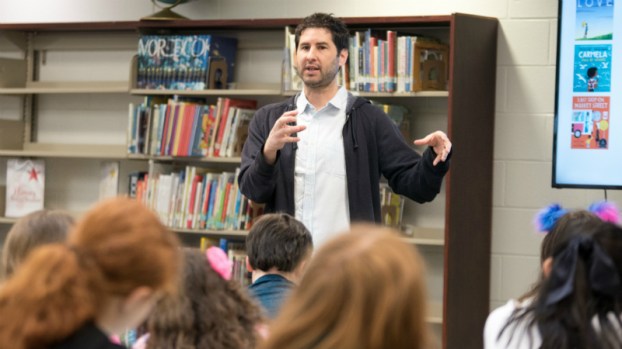 HOOVER – Matt de la Peña told his unlikely story of becoming an accomplished author to students at Berry Middle School on Friday, March 22—and provided tips for aspiring writers during a workshop.

The author’s visit to Berry began with a writing workshop in the school’s media center.

De la Peña gave students writing prompts then time to jot down some thoughts before discussing the ideas of some volunteers.

One prompt was, “When you look back at your life, what do you see?” Answers included “moving away” and “endless opportunities.”

“The reason I do that with students is because I’ve done that for every character I’ve ever written,” de la Peña said and added that writers need to know much more about their subjects than do readers.

Other advice included to listen more than talk, and to read much.

De la Peña shared a theory about writing that beginning writers try to control too much of their stories. Instead, writers should “leave space for the reader’s story.”

He told the story of an ended relationship while a youth, and how he listened to a particular song over and over because he felt like the lyrics spoke to his situation.

Looking back, de la Peña said he was adding his experience to the lyrics, which was why they were so powerful to him.

“It should be a collaboration between the reader and the text,” he said and also discussed why people often are disappointed by film versions of books they have read. “When you watch the movie version of a book, they’re stealing your job (of using imagination to picture people, places and emotions).”

After the workshop, more students heard from de la Peña at an assembly, where he discussed his path to becoming an author.

De la Peña grew up near San Diego in a town with “very little education.” His father was 17 and his mother 16 when he was born, and he had to repeat the second grade because he could not read.

“I thought, ‘Wow, if I can’t even get to the third grade, I must be an unintelligent kid,’” he said.

De la Peña said he compensated for that self-perception with sports, especially basketball.

He had a conversation with a friend’s mom about college, but his family did not have enough money to pay for a college education and his grades would not yield a scholarship.

But he earned a basketball scholarship to the University of the Pacific and later received his MFA in creative writing from San Diego State University.

De la Peña recalled his father, a quiet man, telling him that he considered his son a “success.”

“I believe having a goal can change your life even if you never achieve the goal,” de la Peña said.