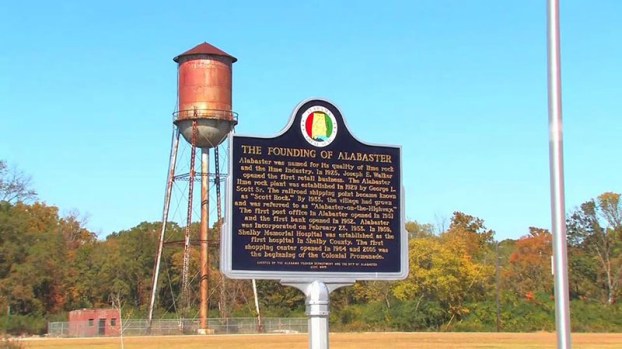 The city of Alabaster is using local funding and Alabama Bicentennial grants to renovate the area surrounding the historic water tower and jail cell on the site of the former Siluria cotton mill. (Contributed)

ALABASTER – One of the most historic remaining structures in Alabaster soon will see some upgrades, as the city recently sought out and received grants to fund the improvements.

During its April 1 meeting, the Alabaster City Council voted to accept a $2,500 Alabama Bicentennial grant and a $7,000 Alabama Historic Commission grant requiring a $7,000 match, bringing the total available funds to $16,500.

Alabaster Mayor’s Assistant Karen Fillingim sought out, applied for and received the pair of grants, earning praise from the City Council during a pre-meeting work session on April 1.

The city is planning to use the funding to construct a decorative fence around the old Siluria Mill water tower in the field behind City Hall and the Alabaster Senior Center.

The water tower is one of the only remaining portions of the old mill, which took up the majority of the land on which the Senior Center and City Hall now reside.

The fence, which will replace the worn chain-link fence currently at the base of the tower, will be constructed of wrought iron, and will be anchored by four stucco and stone pillars. The appearance of the pillars will match the “City of Alabaster Municipal Complex” sign in front of City Hall.

“The fence will make a huge difference in the way it looks,” Alabaster Mayor Marty Handlon said. “The goal is to get it done in the next month or two.”

The city previously commissioned the Barge, Waggoner, Summer and Cannon engineering company to conduct a structural review of the water tower, which found it to be sound, Handlon said.

During a future work session, the City Council will discuss other options for improving the appearance of the water tower, such as possibly seal-coating the exterior of the structure, landscaping and placing an educational sign next to the new fence, council members said on April 1.

By NEAL WAGNER / Managing Editor ALABASTER – Any new townhomes or apartment complexes built in Alabaster would have to... read more