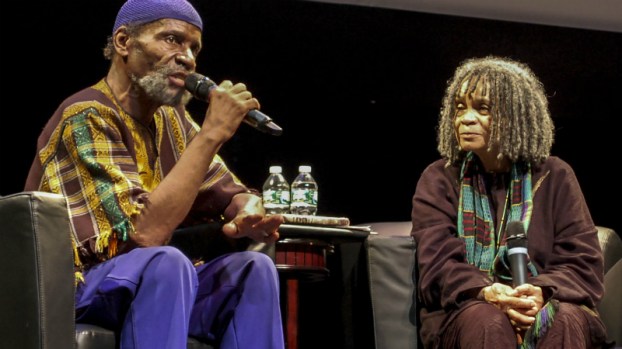 Celebrated poet Sonia Sanchez, right, rose to prominence in the 1960s and 1970s when she became part of the Black Arts Movement and Civil Rights Movement. (CONTRIBUTED)

HOOVER – The second annual Magic City Poetry Festival, a month-long celebration of the power of the spoken word, announces that its featured event is “An Evening With Sonia Sanchez,” taking place at the Jefferson State Community College, Shelby-Hoover Campus on April 16 from 7-9 p.m.

The event is free and open to the public.

Sanchez rose to prominence in the 1960s and 1970s when she became part of the Black Arts Movement and Civil Rights Movement. While becoming influential in activist groups like CORE, Sanchez also wrote poetry and essays about Black identity and Black liberation.

She taught at Temple University as the first Presidential Fellow in 1977. She was the university’s Laura Carnell Chair in English until her retirement in 1999. Throughout her career, she has written 18 books.

Sanchez has earned numerous awards throughout her career, including the PEN Writing Award in 1969, the National Education Association Award 1977-1988, The National Academy and Arts Award and the National Endowment for the Arts Fellowship Award in 1978 and 1979, the Lucretia Mott Award in 1984, the Pennsylvania Coalition of 100 Black Women’s Outstanding Arts Award, the National Black Caucus of State Legislators’ Community Service Award, and the American Book Award in 1985 for her book Homegirls and Handgrenades. She also won the Peace and Freedom Award from the Women’s International League for Peace and Freedom in 1989.

Sanchez has continued to receive honors well into the 21st century. Such awards include (but are not limited to) the Pew Fellowship for the Arts 1992-1993, the Langston Hughes Poetry Award in 1999 for Does Your House Have Lions?, the Robert Frost Medal and the Ford Freedom Scholar from the Charles H. Wright Museum of African American History. In 2001, the Harper Lee Award in 2004, the National Visionary Leadership Award in 2006, the Robert Creeley Foundation’s Robert Creeley Award in 2009, and was honored at the 16th Annual Dr. Betty Shabazz Awards in 2017. Last year, she was given the Academy of American Poets’ Wallace Stevens Award.

Sanchez’s poetry has taken her across the world, where she has lectured in Africa, England, Cuba and the Caribbean, Nicaragua, Australia, China, Canada and Norway as well as the United States.

“This year’s festival brings poetry and community together in a whole new way. All of our events are exciting, but we are particularly thrilled to be able to bring Sonia Sanchez, Birmingham’s own daughter and international revolutionary and celebrated poet, back to her home city,” said Ashley M. Jones, Director of the Magic City Poetry Festival. “Sonia has fought for equality and justice for her entire career, and her poetry has led the way for countless generations of poets, spoken word artists, activists, and hip hop artists. It will be such a beautiful and powerful night–a jewel in the center of this crown of April events.”

“An Evening with Sonia Sanchez” is co-sponsored with the Red Mountain Reading Series at Jefferson State Community College.

Visit the event’s Eventbrite page to register for attendance: https://www.eventbrite.com/e/an-evening-with-sonia-sanchez-tickets-57994803017

Other notable events occurring during the Magic City Poetry Festival include a commemoration of Dr. Martin Luther King, a March Quilts sewing session with Bib & Tucker Sew-Op in honor of Sanchez, a documentary screening of BaddDDD Sonia Sanchez at the Birmingham Public Library and naming Tina Mozelle Braziel as the first annual Magic City Eco-Poet in partnership with the Cahaba River Society. Several events will also highlight the power of community with a celebration of the Little Free Library, a block party near the Woodlawn Street Market, and a partnership with the UAB Media Studies Program to craft a lived history of this year’s festival as experienced by UAB documentary students.

A full calendar of events is available at magiccitypoetryfestival.org.

By NEAL WAGNER / Managing Editor ALABASTER – One of the most historic remaining structures in Alabaster soon will see... read more