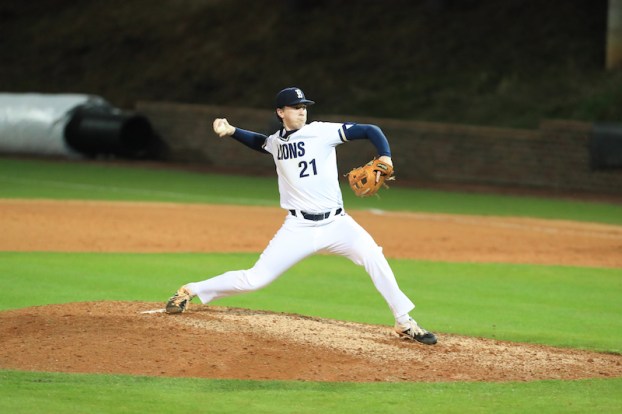 The Briarwood baseball team improved to 3-0 in area play with a 13-4 victory against Ramsay on Tuesday, April 2. (Reporter photo/Keith McCoy)

BIRMINGHAM – After an 0-11 start through a difficult schedule, the Briarwood baseball team has hit its stride, and with a 13-4 victory at Ramsay on Tuesday, April 2, the Lions have not only won three consecutive area games to remain unbeaten in area play, but have also won six of their last seven games.

After falling behind 1-0 in the first inning against Ramsay and in a 3-3 tie through three innings, the Lions (6-12, 3-0) posted 10 combined runs between the fourth and sixth innings to pull away for the 13-4 win.

Trailing 1-0 through two innings, Briarwood flashed its first sign of offense in the top of the third when back-to-back walks to Tyler Waugh and Wesley Helms started the threat.

That was followed by a bases-clearing triple from Blake McKenna to quickly put the Lions in front 2-1. Briarwood’s final run of the inning came a batter later when Carson McKinney doubled on a line drive to right field to bring home McKenna and give the Lions a 3-1 advantage.

Ramsay quickly answered in the bottom half of the inning with two runs behind two singles, a walk and an error, which knotted the game back up at 3-3.

In the top of the fourth, Briarwood answered back by taking advantage of two hit batters when Helms hit a two-out single to drive in Parker Hutson for the 4-3 lead—a lead the Lions didn’t relinquish the rest of the way.

Starting with the three runs in the third, Briarwood’s offense had woken up and scored in four consecutive innings, but it was an eight-run fifth that put it away.

The inning started with two singles from McKinney and Eli Steadman as well as a double from Sam Hamner to quickly score two runs. After the first out was recorded, an RBI single from Cal Higdon put another run on the board.

That was then followed by a single and walk to drive in one more before a hit batter loaded the bases. With two outs now on the board, McKinney and Hamner striped back-to-back singles to drive in a combined four runs to pull ahead 12-3 at the end of the inning.

Ramsay was only able to answer with one run in the bottom of the fifth, which was quickly answered in the top of the sixth with Briarwood’s 13th run in the 13-4 victory.

By ALEC ETHEREDGE | Sports Editor CHELSEA – It took two innings for the Chelsea Hornets to leave their mark... read more