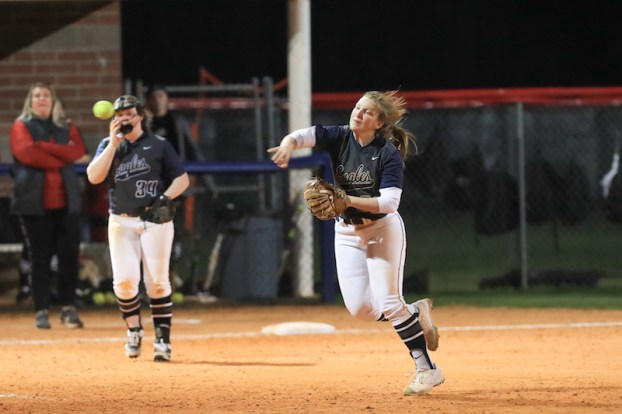 The Oak Mountain Eagles took down Tuscaloosa County on Tuesday, April 2, to pick up their second area win of the season. (File)

NORTH SHELBY – In one of their most dominant outings of the season, the Oak Mountain Eagles were able to carry over momentum from a strong showing at the Gulf Coast Classic by picking up an 11-1 area victory against Tuscaloosa County at home on Tuesday, April 2.

Having gone 5-2 at the Gulf Coast Classic and winners of eight of their last 11 games, the Eagles had a ton of confidence heading into the area matchup and it showed both defensively and at the plate.

Oak Mountain (12-9, 2-1) outhit the Wildcats 10-3 in the victory and scored four runs between the third and fourth innings, while only giving up one in the first to pull away for the easy victory.

After falling behind 1-0, the Eagles answered in the bottom of the second when Emily Hart hit a ground ball that ended in an error and allowed pinch runner Cat Fortner to score and tie the game.

That was just the start of what was about to be an explosive offensive onslaught in the next two innings.

In the bottom of the third, the Eagles used three singles in the first four at bats to take a 2-1 lead after an RBI single from Abi Brown. After an error and a fly out, the bases were loaded with two outs for Hannah Atwood.

Atwood took the first pitch she saw and cleared the bases with a three-RBI double. She was eventually thrown out to end the inning trying to leg out a triple, but with Oak Mountain having taken a 5-1 lead, the damage was already done.

After a 1-2-3 inning defensively, the Eagles stepped back to the plate and quickly loaded the bases again after an RBI single from Autry put Oak Mountain up 6-1.

With one out and the bases loaded, a passed ball allowed one run to score before a walk from M’Kiyah Mitchell loaded the bases again for Julia Tucker.

Tucker then hit an RBI single to drive in the third run of the inning. A groundout from Grace Hummel then put two outs on the board, but also drove in Oak Mountain’s ninth run of the game to give the Eagles a 9-1 lead.

Following a scoreless fifth inning, the Eagles stepped back to the plate and ended the shortened six-inning game when Atwood hit a two-RBI double with the bases loaded to end the game with a 10-run rule 11-1 victory.

Lacy Marty got the complete-game win in the circle allowing three hits and one run, while striking out five.

Thompson pulls away from Chelsea for 25th win

By ALEC ETHEREDGE | Sports Editor ALABASTER – There was never a doubt in Thompson picking up its 25th win... read more