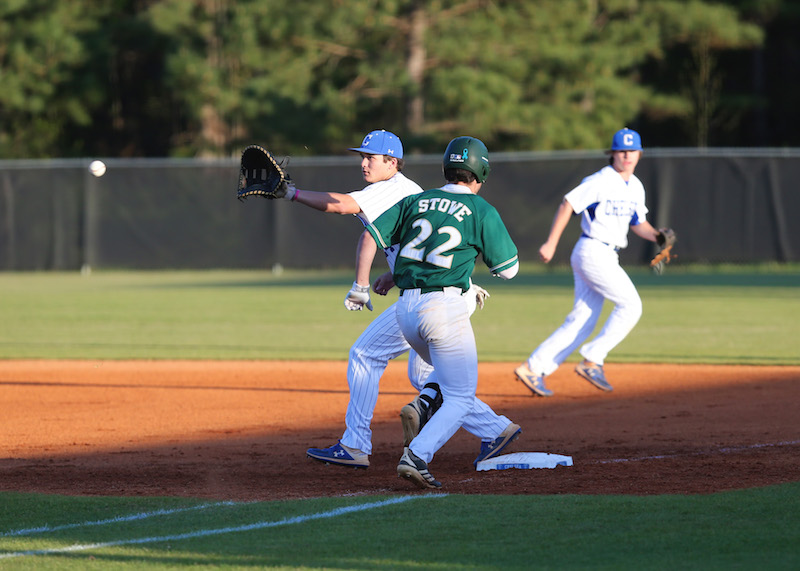 Chelsea clinched a playoff spot with an 8-6 victory against the Pelham Panthers on Wednesday, April 3, to improve to 4-0 in area play. (For the Reporter/Cari Dean)

PELHAM – The Chelsea Hornets had an important night on Wednesday, April 3. Not only did they score four runs in the final two innings to complete an area sweep of the Pelham Panthers in a road matchup, but they moved to 4-0 in area play to officially clinch a spot in the 2019 Class 6A playoffs.

With just two games left against the Helena Huskies, the worst Chelsea can finish in Class 6A Area 8 is 4-2, and with Calera and Pelham both already having three losses in the area, that would guarantee the Hornets at least a finish of second in the area.

A night after downing the Panthers 14-4, Chelsea had the confidence needed to pull off the sweep, but Pelham made it a much more compelling game in an 8-6 battle.

The first two innings of the matchup went by scoreless, but then the action started as runs were scored by one or both teams the remainder of the game.

In the top of the third, the Hornets started it off thanks to the first three baserunners of the inning reaching base safely to load the bases.

A ground ball during the fourth at bat ended in a big double-play for the Panthers, but it also allowed Austin Frye to cross the plate for an early 1-0 advantage.

With a runner still on third, however, Bennett Horton capitalized with an RBI single to give Chelsea a 2-0 advantage heading to the home half of the inning.

It looked like the Hornets would get out of the inning with the lead, but Pelham put together a two-out rally to storm in front.

An RBI double from Hunter Stowe put the Panthers’ first run on the board, before Kasey Clark stepped to the plate and lined a single to right field to drive to more runs in and put his team up 3-2 through three.

Chelsea quickly answered back in the top of the fourth to equal the score. Following three consecutive singles, a fielder’s choice brought home Connor Ball, but again the damage was limited with that being the Hornets’ only run of the frame.

Pelham came right back yet again and regained the lead in the bottom half of the inning thanks to a leadoff walk and single that put two aboard with no outs.

One batter later, Jackson Weaver grounded out, but Phillip Duke was able to cross the plate for the 4-3 lead.

The back-and-forth affair continued into the fifth as Chelsea got a huge home run from Carter Frederick to tie the game with one swing of the bat despite that being the only hit in the inning.

For the first time in three innings, the Panthers didn’t have an answer in the bottom of the fifth, which became costly.

In the top of the sixth, Chelsea took advantage and put together its best inning of the game.

Like Pelham had done earlier in the contest, the Hornets put together a two-out rally. After the second out was recorded, Nolan Forehand walked to load the bases.

To that point, all three baserunners had reached with an error, a hit batter and a walk. That trend continued, as Chelsea didn’t need a hit to score its three runs in the inning.

Bennett Horton and Carter Frederick both hit ground balls in the infield, but errors allowed one run to score during Horton’s grounder and two runs to score after Frederick’s hit.

Despite leaving the bases loaded in the inning after another walk, the Hornets had left their mark and taken a 7-4 lead late in the game.

The Panthers, however, still had some fight left in them and came back with an answer this time around.

Duke and Matthew Meddick led off the inning with back-to-back singles, the second of which drove in Duke for the first run of the inning.

Following a walk, a sac bunt moved both baserunners into scoring position before a groundout drove in Meddick to cut the deficit to 7-6.

Chelsea was able to stop the damage there and escape the inning with a one-run lead.

Then, in the top of the seventh, the Hornets got an insurance run to help them feel more comfortable heading to the final half inning. Forehand singled to left field to drive in Connor Ball for the 8-6 advantage.

In the home half of the final inning, Pelham looked to be taking advantage of its last chance when two walks and a hit batter loaded the bases with two outs.

In a tough jam on the mound, Forehand was able to bounce back from hitting Meddick and forced a groundout to Will Peacock at first to end the game as the bases were left loaded.

The two teams ended up leaving a combined 17 runners on base during the matchup, as plenty of chances were left at the plate.

Chelsea was led by Frederick who went 3-for-4 with two RBIs and one run scored. Ball and Reaves each went 2-for-4 with two runs scored. Jacob Boyle, Forehand and Horton all had one hit and one RBI.

The Panthers were led by Meddick who went 2-for-3 with one RBI, while Clark went 1-for-3 with two RBIs. Stowe, Weaver and Carter Reid each had an RBI as well.