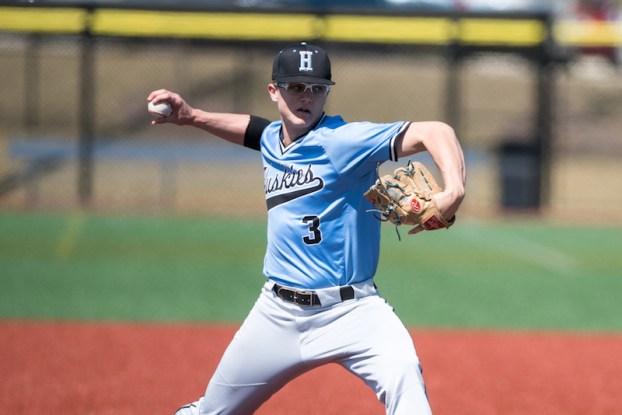 The Helena Huskies picked up two crucial area wins the week of April 1, to improve their record even further in the area standings by shutting out Calera 2-0 on Tuesday, April 2, and defeating the Eagles again 8-2 on Wednesday, April 3.

Below are recaps of how each game unfolded between both teams:

Helena got two incredibly strong performances on the mound beginning with starting pitcher Seth Gregory and Jack Freeman who recorded the save. The two pitchers combined to throw a two-hit shutout in the Huskies 2-0 victory over the Eagles.

Offensively, Helena got things started right away in the top of the first inning with a two-out rally.

Tyler Jon Santos singled on a ground ball as Ryan Storey entered the game to pinch run for Santos. Storey would advance to second on a wild pitch, leaving the door open for Helena to get on the scoreboard.

JC Wilburn would come through for Helena, hitting an RBI single to score Storey to put the Huskies up 1-0.

After several scoreless innings from both teams, Helena would get an insurance run in the top of the fifth inning thanks to an RBI double by Will Griffith to score Nick Thompson to extend the Huskies’ lead to 2-0.

Two runs were more than enough for Helena as Gregory threw five scoreless innings where he allowed just one hit and struck out six to pick up the win.

Freeman would enter the game to pitch the final two innings and picked up right where Gregory left off. Freeman also allowed just one hit and struck out two to record the save.

At the plate, six different Huskies recorded a hit in the game.

The following day, Helena met the Eagles for a second time and enjoyed more success at the plate, collecting eight runs in the span of two innings to complete the sweep.

Helena did find themselves down early, however, as Calera took a 2-0 lead in the top of the second inning forcing the Huskies to rally.

Helena took no time to make up the deficit in the next half inning as the Huskies took advantage of a walk and a catcher’s interference to start things off.

To cap off the inning, Helena scored two more runs thanks to a Calera error and an RBI single by Brody Moss to collect six runs in the inning.

The Huskies would add onto their lead in the next inning as Thompson started the bottom of the third with a leadoff triple.

Landon Leake was the next batter and roped an RBI double to left field to score Thompson to make it 7-2 Huskies.

Helena’s final run of the inning, and ultimately the game, came on a sacrifice fly from McGwire Turner to score Leake to make it 8-2.

On the mound, Helena got a solid start from Will Griffith who pitched five innings and allowed just two runs on five hits while striking out three.

McCall Caruso pitched a no hitter in the final two innings to close the game out for the Huskies.

Turner and Leake both led Helena at the plate with two RBIs a piece.

With both wins, Helena improved to 3-1 in area play so far this season.

By ALEC ETHEREDGE | Sports Editor PELHAM – There is little separation in the Class 6A Area 8 soccer standings... read more