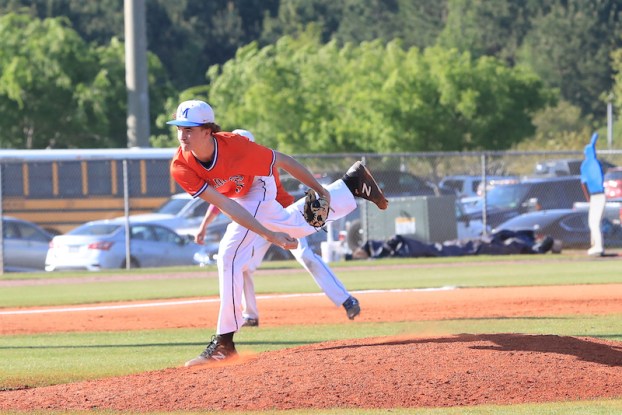 Montevallo picked up a big win against Oak Grove on Wednesday, April 3, to split an area series with the first-place Tigers. (For the Reporter/Dawn Harrison)

MONTEVALLO – While the Montevallo Bulldogs lost two of three games in a three-game area series against Oak Grove between Tuesday, April 2, and Wednesday, April 3, they were able to pick up an important win in the second game of the series.

With the first two games of the three-game series being the ones that count toward the area standings, the Bulldogs were able to win game two of the series 12-1 on Wednesday after losing the first game 5-1 on Tuesday.

With two wins against Indian Springs, and now having split series with Childersburg and Oak Grove, Montevallo is now 4-2 in area play with one series against Leeds still left to be played.

The third game in those series are tiebreakers and could come into play, but for the time being Montevallo is in third in the five-team area with Oak Grove leading the way at 7-1.

Leeds is just behind currently at 3-2, and the second playoff spot behind Oak Grove will likely be determined when the Greenwave and Bulldogs meet in the final area series of the season on April 9 and 11.

While Oak Grove has been one of the most consistent teams in the area, and Montevallo had lost to them 5-2 on Tuesday, the Bulldogs were able to bounce back in a dominant way on Wednesday to pull off a 12-1 victory and hand the Tigers their first area loss of the season.

While they lost the night-cap of the doubleheader 14-11, scoring a combined 23 runs against Oak Grove is something that will build Montevallo’s confidence moving forward.

In the 12-1 victory, the Bulldogs scored all 12 runs in the first three innings thanks to posting at least three runs in each frame to pull away for a mercy-rule victory in five innings.

After an out was recorded in the bottom of the first, Malik Inabinette and Cody Posey hit back-to-back doubles to bring home the first run, before Grant Cordes hit an RBI single for the second run of the inning.

A fourth hit in a row and third double in four at bats from Clay Colley drove in Cordes for the final run of the inning to give Montevallo a quick 3-0 lead.

That was just the start, however, as the second inning was full of fireworks.

After a 1-2-3 inning defensively, the Bulldogs stepped back to the plate and wasted no time scoring more runs.

A single from Daniel Whitson led off the inning, which allowed Josh Mims to hit an RBI double to put MHS on top 4-0.

Following a walk to Inabinette, Posey stepped back to the plate with another big hit. This time he drove a three-run home run over the right-field wall that put the Bulldogs on top 7-0 through two innings of play.

Then, after another 1-2-3 inning defensively in the top of the third, Montevallo put the game away in the home half.

A leadoff single from Wesley Burdett kick-started the inning. With one out, a walk followed by an error drove in the eighth run of the game.

Then, doubles from Inabinette and Cordes, as well as a single from Posey drove in the Bulldogs’ final four runs of the game.

Oak Grove scored one run in the top of the fourth on an error, but never gained enough steam to get any closer.

Posey played lights out going 3-for-3 with five RBIs thanks to a double, single and home run. Cordes and Inabinette both picked up two hits and two RBIs, while Colley had a hit and RBI as well.

On the mound, Mims tossed a complete game to pick up the victory while allowing five hits and one unearned run.

By ALEC ETHEREDGE | Sports Editor PELHAM – There is little separation in the Class 6A Area 8 soccer standings... read more