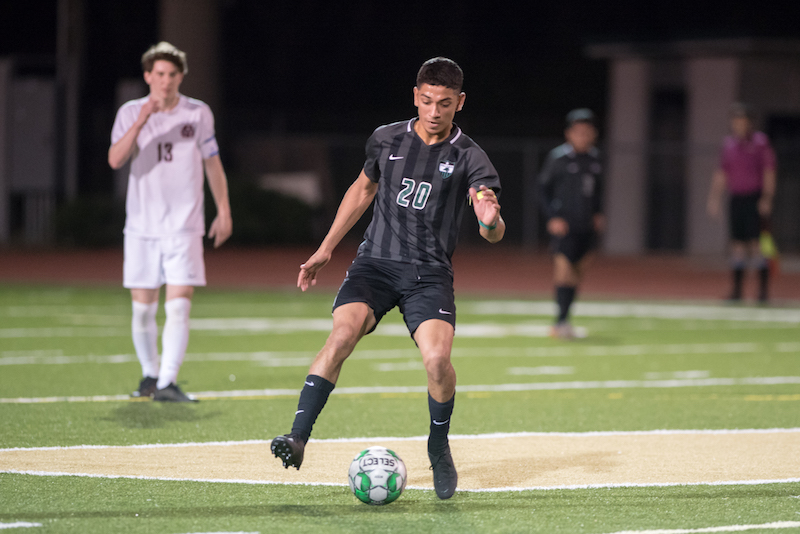 The Pelham Panthers were able to pull off a comeback victory against Helena on Tuesday, April 2, to improve to 2-1 in area play and sweep the season series with their rival. (File)

PELHAM – There is little separation in the Class 6A Area 8 soccer standings with Chelsea, Helena and Pelham all in a battle for not only two playoff spots but for an area championship as well, making the matchup between the Huskies and Panthers on Tuesday, April 2, an important one.

Having already beaten Helena 3-0 earlier in the season, Pelham came into the matchup with a slight advantage, but were forced into a 1-0 deficit a little more than midway through the first half of the game.

Pelham, however, put together a valiant comeback in the second half scoring three goals in the final 21 minutes of the game to pull off the 3-1 victory.

It took a while for the Panthers’ offense to get going, but once it did, Helena struggled to find answers.

Thanks to the win, Pelham not only completed the season sweep of the Huskies, but the Panthers moved to 2-1 in the difficult area. With Chelsea at 1-1 and Helena at 1-2, Pelham leads the area for the time being, but its loss is to Chelsea, meaning anything can happen, including a three-way tie.

In the first 20 minutes of the crucial area matchup, Pelham got the only great chance on a penalty kick from Irvin Rodriguez, but Helena’s Alex Franklin made an incredible save to keep the game scoreless.

It was shortly after that when the Huskies took advantage of that momentum swing and pulled ahead.

The ball was eventually played through to Zac Fuller in the box where he took a shot that ricocheted off the keeper, but he eventually was able to get a header on the rebound and buried it into the net for a 1-0 advantage with 16 minutes left in the opening half.

Helena pressed for the next few minutes, but with eight minutes remaining in the period, Pelham started getting some great looks, and despite not scoring in the half, the Panthers closed the period out by putting the pressure on the Huskies.

While they were trailing in the game, that really turned the momentum in the favor of the Panthers moving into the second half as they continued to press for goals and stretch Helena’s back line.

Eventually, all of that pressure paid off when Rodriguez put the equalizer in the back of the net with 21 minutes left in the game off a combination play to tie the game at 1-1.

All of the momentum was squarely in favor of the Panthers, and they didn’t let up.

They continued to get chance-after-chance over the next several minutes and with 13 minutes remaining, Miguel Obando put Pelham in front with their second unanswered goal in an eight-minute span.

Then, with Helena pressing trying to find an equalizer in the final minutes, Pelham was not only able to keep the ball away from the Huskies, but added an insurance goal with a minute left in the contest to seal the 3-1 win thanks to Greg Blue hitting a deep shot from the corner after a throw in.

With the 3-1 victory, Pelham avoided falling to 1-2 in area play to create even more chaos and won their second game in as many days after losing four of five games before spring break by one goal each.

Helena is now 1-2 in area play and 6-7-1 overall, but the Huskies have already beaten Chelsea once and will have a chance to complete the season sweep of the Hornets on April 9, which would be massive for their playoff hopes.