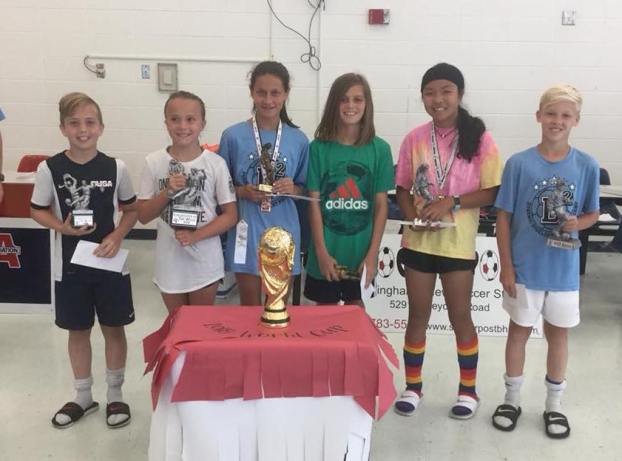 Current Thompson girls soccer coach Dan DeMasters is bringing his D2 soccer camp back for the fourth year this summer at both Thompson High School and Westminster School at Oak Mountain. (Contributed)

Establishing roots deep down at the youth level is key in any sport, and something current Thompson girls head coach and Director of Soccer Dan DeMasters has a passion for doing, and the reason he created the Dynamic Development soccer program.

It was also key in drawing him from Oak Mountain High School, where he won three consecutive 7A state championships at the boys level, as being the director of soccer gives him the ability to oversee all soccer in Alabaster City Schools from grades 7-12.

Now having a direct impact on those grade levels, he’s still hoping to continue reaching kids at a younger age grow a passion and love for the game, which is where the D2 soccer camp programs come into play.

Now in its fifth year, Dynamic Development aims to give future soccer stars the learning environment that is not only structured and built for success but fun as well. The goal is to grow each prospective soccer player’s knowledge and skills to give them the proper methods to succeed as they grow up in the sport.

Each year, D2 puts on two camps headed by DeMasters himself as the camp director. As one of the best high school coaches in the state, he gives a hands-on experience that is devoted to creating a fun environment, while also giving a high level of coaching advice to each camper.

As a head coach at Oak Mountain DeMasters not only won three state championships and a national championship, but he racked up a record of 104-15-20 overall.

He has playing experience at the collegiate and professional level, and plenty of accolades to help him understand what it takes to develop into the best of players.

This year’s two camps will take place at Thompson High School June 17-21 and Westminster School at Oak Mountain June 24-28, and will be open to ages 5-12 for both boys and girls.

Each day of camp is broken up into different sessions.

After arriving at 9 a.m., the campers will go through a warm-up and fast feet session with a morning activity.

Then they’ll head into session one for the day which will consist of small-sided games.

Following a lunch break, session two will feature Dutch 3v3 competitions, followed by World Cup games and the camper of the day before the day comes to an end at 3 p.m.

On Thursday evening of the camp, D2 will host a parents night from 6-7:30 p.m. for all campers and their parents to be a part of. Then on the final day, the closing ceremonies will be held at 11:15 a.m. with pick-up set for noon instead of 3 p.m.

In addition to DeMasters, other staff members at the camp will include local collegiate soccer players from Division I, II and III schools.

The cost of the camp is $230, but you can email d2camps@gmail.com for discounts. You can also register for the camp online at Dynamicdevelopment.com.

All campers will get a camp T-shirt and new Nike camp ball. Kids will also get to dress up with uniform day and wacky Wednesday, while other interesting aspects will be a talent show and soccer millionaire.

DeMasters, who is celebrating the birth of his first child on April 4, has a unique ability for developing soccer talent, having sent more than 30 of his high school players to the collegiate level.

Dynamic Development also offers individual and group training throughout the year, and DeMasters not only looks forward to building his girls program at Thompson but the sport amongst kids in general.