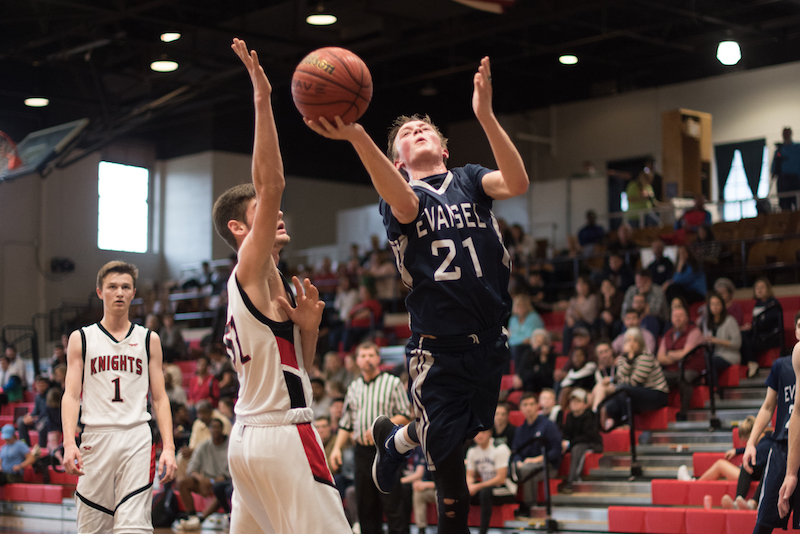 The 2018-19 AISA/ACSC All-County basketball team has been named after impressive performances by all five teams. (Reporter photo/Keith McCoy)

The 2018-19 basketball season saw several standout performances, including a strong run from the Kingwood Lions and an ACSC state championship from the Evangel Lightning. Coosa Valley also saw plenty of positive signs from a young group of players, while Cornerstone and Hope Christian saw older leaders prepare groups of younger players for bright futures.

All of the different types of success was due to buy in from players who gave their all on every night, and as a result, earned recognition on the 2018-19 AISA/ACSC All-County basketball team.

Guard: Tanner Falkner, senior, Cornerstone. Tanner Falkner has been a staple in athletics at Cornerstone for a while, and in his final basketball season, the senior averaged 16.5 points per game and was a leader on the floor.

Guard: David Smith, senior, Hope Christian. It wasn’t the strongest year overall for Hope Christian, but it was a team full of youth led by Smith as one of just a few seniors. He averaged 22.8 points, 7.9 rebounds, 1.9 steals, 1.8 blocks and 1.7 assists per game. He did just about everything he could for the team.

Forward: Carson Hendon, junior, Evangel. Hendon was a strong force for the Evangel state championship team this season thanks to averaging close to a double-double. He posted 12.2 points and eight rebounds per game to make a huge difference on the floor.

Forward: Devin Ervin, senior, Kingwood. It was a special season for the Kingwood Lions, and Ervin was one of the biggest keys to their success. He also came close to averaging a double-double this year with 15 points and 9.4 rebounds per game. Ervin also averaged 2.4 steals per game, which was one of the best marks in the county.

Forward: Jarrod Posey, junior, Coosa Valley. While several players were close to averaging a double-double, Posey was the only one to do so. The Rebels’ junior posted 13.5 points and 10.7 rebounds per game. He also led the county in blocks per game with 3.1 thanks to 62 on the season.

Guard: Xaveon Smith, junior, Cornerstone. One of the best scorers in the county, Smith averaged 22 points per game this season as part of a strong one-two punch for the Chargers.

Guard: Brayson Edwards, freshman, Coosa Valley. Just a freshman, Edwards made his presence known by averaging 11.5 points, 8.2 rebounds and 3.1 steals per game. He has a very high ceiling moving forward.

Guard: Caleb Strayer, senior, Kingwood. Strayer was another key to Kingwood’s team this year thanks to averaging 10.6 points, 2.7 rebounds and 1.9 steals per game for the Lions.

Forward: Hudson Hobbs, junior, Evangel. Hobbs led the Lightning in points per game this season with 15.3 and also averaged five rebounds and 1.1 assists per game to help lead his team to the ACSC title.

Forward: Miles Clay, senior, Kingwood. Clay made Kingwood the only team with three players named to the All-County team, and rightfully so. He averaged 14.7 points per game this season and led the county in assists per game at 5.2. He also posted 4.1 rebounds and 3.2 assists per game.