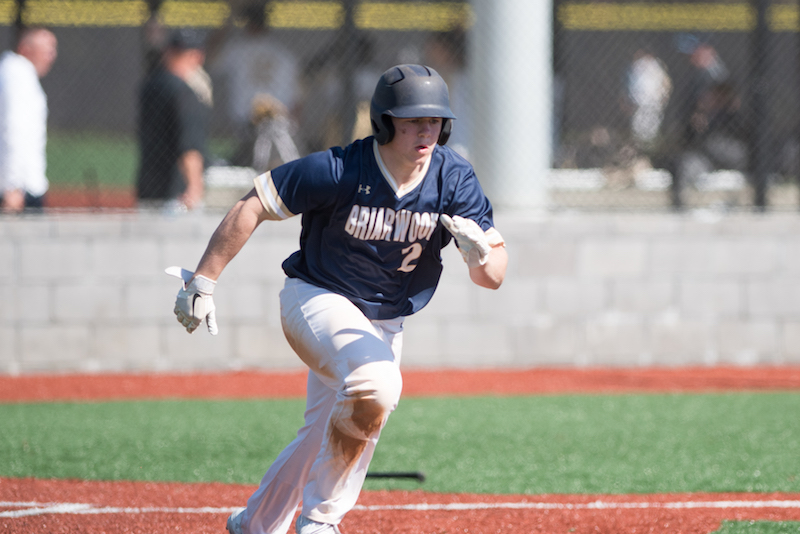 NORTH SHELBY – After an 0-11 start, many may have thought this was going to be a down year for the Briarwood Lions, but they’ve incredibly flipped the script and have now won eight of their last nine games, including four consecutive area games.

The Lions, who are now 8-12 overall and 4-0 in area play, completed an area sweep of Ramsay on Friday, April 5, with a 14-3 victory after beating the Rams 13-4 earlier in the week. And then to show their improvement, a day later they redeemed a loss from earlier in the season by taking down Class 7A Hewitt-Trussville 8-5 on Saturday, April 6.

It’s a team that could have folded up shop before area play even started with no momentum at the time, but instead the Lions realized all of their goals were still in front of them. Now, their strong play can be credited to an offensive resurgence having scored four or more runs in eight of their last nine games.

That offensive attack remained potent against Ramsay in the 14-3 victory, as the Lions totaled 12 hits to the Rams’ three hits in the game.

After falling behind 3-0 in the top of the first, Briarwood answered with two runs in the bottom half of the inning to cut into the deficit. One of the runs came on an RBI triple from Wesley Helms, while the other came via an RBI double from Carson McKinney.

That just sparked Briarwood’s bats. The Lions went on to score four runs in each of the next three innings to not only take the lead but pull off the mercy-rule victory in five innings.

The second inning was highlighted by a two-run home run from Blake McKenna, an RBI groundout from Helms and an RBI single from Eli Steadman to put Briarwood out in front 6-3.

A wild pitch and RBI groundout put the first two runs on the board in the bottom of the third, while back-to-back doubles from McKenna and McKinney drove in the final two runs of the inning with two outs.

Briarwood then closed out the scoring in the bottom of the fourth with a dominant effort.

A triple and walk led the inning off with runners on the corners and no outs. That was followed by an RBI single from Parker Hutson before Bryce Perrien hit the second triple of the inning to drive in two more runs for a 13-3 advantage.

The final Briarwood run of the game then came a batter later when Tyler Waugh hit an RBI single for the 14-3 advantage.

Steadman picked up two hits and an RBI, while Hutson and Waugh each added one hit and one RBI with three combined walks.

McKenna pitched four of the five innings and allowed one hit while striking out five.

A day later against Hewitt-Trussville, the Lions scored six runs in the first inning and added one in the second and one in the fifth to pull off the 8-5 victory.

McKenna and Sam Hamner each picked up a hit with two RBIs apiece, while Perrien and Cal Higdon each had two hits with one RBI.

Andrew Ponder pitched the final five innings of the game and allowed just four hits and two runs while striking out five to pick up the victory.