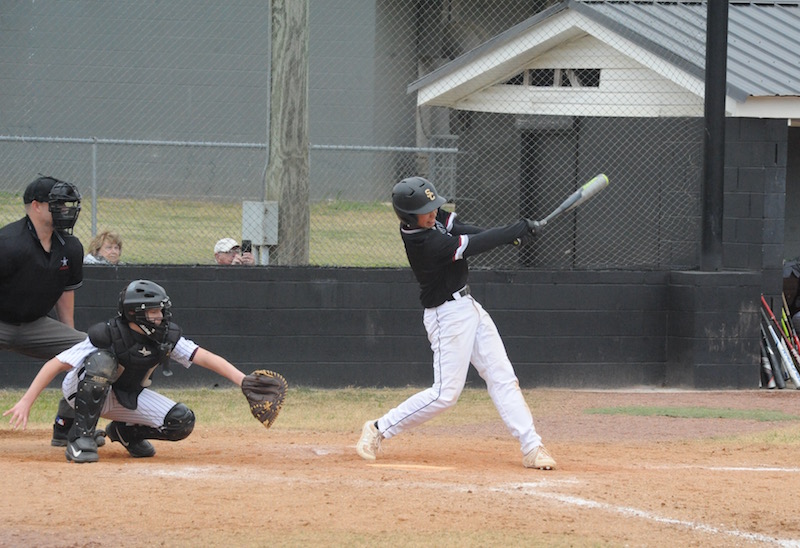 The Shelby County Wildcats picked up an area victory against Marbury on Saturday, April 6, and are now 3-1 in area play with big matchups against Chilton County remaining. (Reporter photo/Alec Etheredge)

It’s crunch time for the Shelby County Wildcats, who have spent much of the season ranked inside the top 10 of the Class 5A standings, but with one week of area play left, they’ll have to prove they’re deserving of a spot in the playoffs after splitting their most recent series with the Marbury Bulldogs.

While the Wildcats lost 4-0 in the series opener, they bounced back with a 4-2 victory on Saturday, April 6, to pick up an important area victory. Marbury then went on to win the final game of the series 4-0, but with that game only counting toward the area standings in a tiebreaker between the two at the end of the season if necessary to determine a playoff spot, Shelby County escaped the weekend 3-1 in area play.

Next up, however, is a good Chilton County team on Thursday, April 11, and Friday, April 12. Like the Wildcats, the Tigers are also 3-1 in area play. So not only will the area championship be on the line, but a playoff spot for Shelby County.

If they can win both they’ll take the area crown and earn a spot in the playoffs, but otherwise tiebreakers with both Chilton County and Marbury will come into play.

In their win against Marbury, Shelby County was able to overcome three scoreless innings to start the game as well as fiving up two in the top of the seventh to pick up the 4-2 victory.

In the bottom of the fourth, back-to-back singles from JT Pennington and Wyatt Miskelly started the threat. Both players eventually moved into scoring position on a passed ball, then were driven home on an error off a hard ground ball from Matthew Pearson to take a 2-0 lead.

Shelby County added to that lead in the bottom of the sixth with two more insurance runs thanks to a walk and double from Austin Harris and Pennington, respectively, to lead off the inning.

The Wildcats didn’t need another hit for both runners to cross the plate. A sac bunt from Pearson drove in one run, then a wild pitch allowed Pennington to score for the 4-0 advantage.

In the top of the seventh, Marbury scored two runs and actually had the game-tying runs on first and second with the go-ahead run at the plate and just one down in the inning. A strikeout and pop out, however, ended the threat abruptly to preserve an important win for the Wildcats.

Shelby County was led by Greg Oliver and Pennington at the plate as both picked up two hits. Pearson had three RBIs to lead the game despite no hits. Kaden Cardwell, Miskelly and JP fox all added hits as well.

Currently the area standings are Chilton County and Shelby County both at 3-1, Marbury at 2-2 and Jemison at 0-4. Marbury would also hold a tiebreaker over Shelby County for the second playoff spot if the two teams finish with the same area record.