Birmingham Bulls set to take on Fayetteville in SPHL quarterfinals 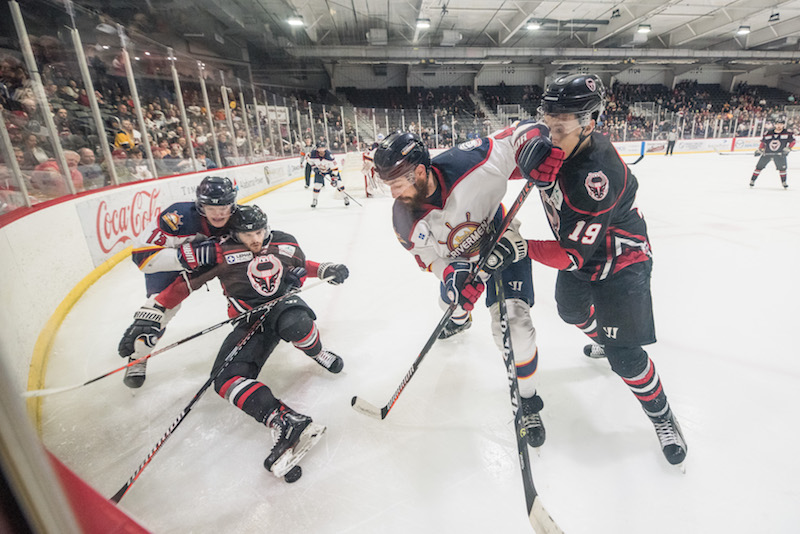 The Birmingham Bulls have challenged the Fayetteville Marksmen in the quarterfinal round of the 2019 SPHL playoffs, which will kick off this Friday and last three games through the weekend. (Reporter photo/Keith McCoy)

PELHAM – While the Birmingham Bulls split their final regular-season series of the season against Roanoke, their playoff fate coming into the final weekend was already determined as the two seed in the league.

With their second-place finish in the regular season, the Bulls got to determine their opponent in the first round of the playoffs following league-leading Peoria choosing to take on Roanoke.

With the second pick, Birmingham chose to face off against the Fayetteville Marksmen in the quarterfinal round of the SPHL playoffs—a team they were a perfect 4-0 against this season.

Head coach Jamie Hicks said during the selection show that he and the staff had met to discuss the selection a few times over the last couple of weeks and knew who they wanted to select each time assuming Fayetteville was still an available opponent.

Known as the challenge round due to picking the opponent you want to challenge, the first round matchups will feature No. 1 Peoria vs. No. 5 Roanoke, No. 3 Huntsville vs. No. 7 Pensacola and No. 4 Knoxville vs. No. 6 Macon.

All teams will play a best-of-three series with the winner advancing to the semifinals.

The good news for the Bulls is they’re not only taking on a team they beat four times this season, but also the eight seed in the standings, which is the lowest of the teams to make the playoffs.

In their four matchups, the Bulls not only won but won each by at least three goals.

Even crazier, four of Fayetteville’s six goals in the series have come on the power play, showing the Bulls seem to have a sizeable advantage at full strength.

Going into their first matchup against each other this postseason, Fayetteville has lost five of its last six games, while Birmingham has won seven of its last eight games.

The key for the Bulls moving into the playoffs will be those three guys in Josh Harris, Jacob Barber and Mike Davis, while additional help from guys like Craig Simchuck, Taylor Dickin, Austin Daae and Shane Topf will be an added bonus.

Harris’ 63 points are the second most in the league, while his 25 goals are tied for fourth with Barber.

He also led the league in save percentage at .933 and was fourth in goals against average at 2.11.

Parks has been sharp in goal all season and has been part of a strong defense that is second in the league in penalty kills and goals against.

Birmingham has a huge advantage on the ice, and the exhausting schedule looks to be the biggest challenge.

The Bulls will play the first game on the road as they’ll travel to Fayetteville this Friday, April 12, with puck drop scheduled for 6 p.m. CST.

They’ll then turn around and come back to Birmingham for the final two games of the series over the next two days with puck drop scheduled for 7 p.m. at the Pelham Civic Complex in both games.

While they are the heavy favorite, win or lose, this season marks a milestone for the Bulls. In just their second season, they have gone from 22-28-6 with 50 points and second to last in the league to 39-15-2 with 80 points and second overall in the league. A remarkable 30-point increase that should have this team fired up for the postseason.