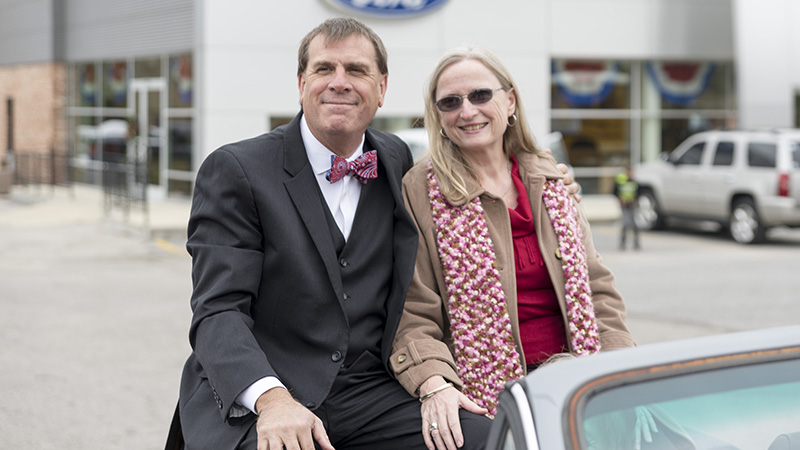 Thompson High School Director of Bands Jon Bubbett and his wife, Jeannie, at a recent Alabaster Christmas parade. Jon Bubbett will be retiring at the end of this school year. (File)

By SARAH JONES / Special to the Reporter

ALABASTER – It’s 7:30 a.m., and the sound of a trumpet can be heard floating down the halls of Thompson High School.

It’s not students practicing, but rather Thompson High School’s band director, Jon Bubbett. His passion for music and education drives him to continue his own growth as a musician even as he looks forward to retirement.

“I’ve been doing the same thing for 38 years, and I think there’s a large part of me that’s ready to do something else,” Bubbett said. “I’m starting to do some other things as well as keep my hand in teaching some, but at the same time there’s a lot of things I’m really going to miss about it. It’s going to be hard to leave and walk away from.

“My wife [Jeanie Bubbett] and I have been talking about doing a lot of traveling, and I’m really looking forward to that.”

After graduating from Troy State University in 1981 with a bachelor’s degree in music education, Bubbett pursued a master’s degree at VanderCook College in Chicago while working at Washington-Wilkes Comprehensive High School in Washington, Georgia.

He moved to Demopolis to continue his teaching and then back to Georgia to work at Irwin County High School from 1990 to 1993 before starting his tenure at Thompson High School.

Bubbett’s time as band director at Thompson will end in May, but the impact he has had among his students and fellow directors will remain according to Lydia Clarke.

Lydia Clarke is a Thompson alumna and music education student at Jacksonville University who said she is inspired by the drive that Bubbett shows his students.

“I enjoyed his leadership camps and how he would always come into school and practice,” Clarke said. “He never stopped learning how to be an educator. That’s something I want to do.”

Ashton Bowles, a Thompson alum and current assistant band director at Thompson, said that the relationship she has with Bubbett is special.

“I get to have a mentor type relationship with him because I see how much he cares for his students and how much work he puts into his job,” Bowles said. “He has shown me that what we do is incredibly important and not impossible.”

Justin White, assistant band director at Thompson High School, began working alongside Bubbett in 2013. He said one of the best things Bubbett has taught him is to be a lifelong learner.

“That is probably one of the biggest things I respect him for,” White said. “Even 38 years in, he still goes to conferences. He’s still working hard to become the best teacher he can be and always hoping for new ideas. It’s so amazing to see somebody who is so active and still growing and learning.”

White hopes that he can continue the legacy of success that Bubbett has established at Thompson.

“Success is leaving the program where it will continue to grow,” White said. “The things that he has established in the program are traditions and values and a system that will allow us to grow to be even better.”

Sadie Appleton, a Thompson alumna who is minoring in music at Jacksonville State University, said Bubbett’s drive for music was infectious.

“His passion allowed me to view music as more than notes and rhythms,” Appleton said. “He taught me how to understand the emotions and artistry of every piece, which is something that is extremely difficult to teach. I left high school with a larger appreciation for music than when I began.”

Emma Fell, a Thompson alumna and music education major at Troy University, said that Bubbett’s mantra of looking forward to bigger and better things has inspired her.

“He always had a vision for the program and for his students, and he was always innovating and figuring out new ways to get us to those new levels,” Fell said. “Whether it was bringing in clinicians or trying new warm-up techniques, everything he did was done with progress in mind.”

Over the years, Bubbett has seen the growth of the music program, and he said this is the most rewarding part of being an educator.

He said he hopes that any student, regardless of career path, chooses to do something that makes them happy.

“Whatever you do in life, you have to follow your passion,” Bubbett said. “Being a teacher, being a musician is a calling. It’s not really something that I decided I was going to do. It was like there’s nothing else I really can do. I don’t really feel like I chose it as much as it chose me.”

Jon Bubbett’s retirement celebration will begin on Saturday, May 11, at 2 p.m. in the Thompson High School band room with a performance by the Thompson Wind Ensemble followed by an alumni band performance and reception. The public is invited and encouraged to attend. There will also be a donation drive to support the Jon Bubbett Commissioning Project.

Birmingham Bulls set to take on Fayetteville in SPHL…