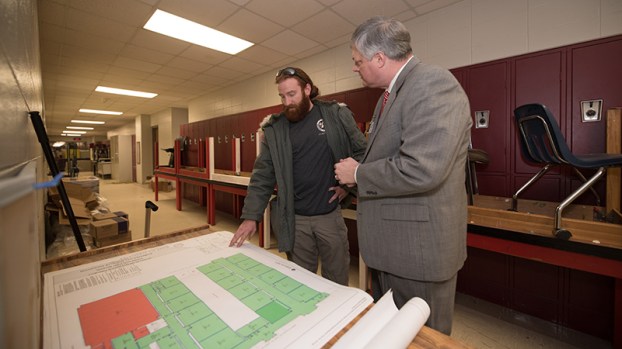 Alabaster School Superintendent Dr. Wayne Vickers, right, reviews renovation plans for the former Thompson High School building during a recent visit to the school. The Alabaster Board of Education voted to approve a moving bid for this summer during an early April meeting. (File)

ALABASTER – The Alabaster City School System’s plan to move multiple school campuses this summer took another step toward completion during an early April meeting, as the city’s Board of Education voted to award a moving bid.

The BOE voted unanimously during its April 8 meeting to award an $85,598 bid to the New Latitude moving company to complete the school moves over the summer months.

“We had some very competitive bids for this. They came in much lower than we thought they would,” said Alabaster School Superintendent Dr. Wayne Vickers.

The company will move items around at several of the city’s schools while they are relatively empty for the summer.

The school moves originally were planned to take place in August 2018 after renovations were completed last summer, but the scope of the renovations to the old THS building were much more extensive than originally estimated, ACS leaders said previously.

Both change orders were approved for the McKee and Associates company, which is handling the renovation project.

Vickers said the project to transform the old THS into the new Thompson Middle School building is progressing on schedule, and should be completed in time to welcome students at the beginning of the 2019-2020 school year.

By NEAL WAGNER / Managing Editor ALABASTER – The Thompson High School cheerleaders were no stranger to success during their... read more