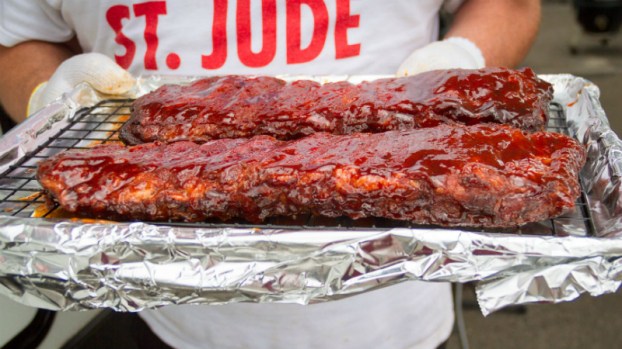 About 20 teams competed in the barbecue competition as part of the Fire at the Foothills event. (CONTRIBUTED)

CHELSEA – This year’s Fire at the Foothills BBQ & Chili Cook-Off was the largest in the event’s nine years of existence, with about 30 entries for the barbecue and chili competitions helping generate about $5,000 for the Chelsea Kiwanis Club and the Chelsea Fire Department.

“It was very successful,” said Scott Weygand, Chelsea City Council member and Kiwanis Club member. “The public really turned out, and the weather was perfect.”

Teams from across the Southeast competed for the title of Grand Champion, which the judges awarded to Puck Daddy BBQ.

The Reserve Grand Champion was Lee La Que, and Team Spirit took the People’s Choice title, which is decided by the amount of tips collected, for the fourth consecutive year.

Judges use a point system in the categories of ribs, butt and chicken to determine the winner, Weygand said.

In the chili cook-off, meanwhile, Carl and the Voodoo Crew won first place, with Justin Fogo in second place and the Chelsea Coffee House in third.

About 20 teams competed in the barbecue competition, with about half that many competing in the chili cook-off.

The event is hosted by the Kiwanis Club, which disperses proceeds to its charities.