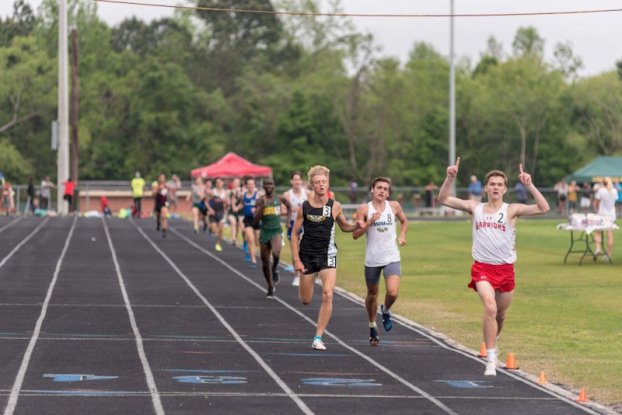 Helena, Pelham and Thompson all had teams compete in the Mobile Challenge of Champions, with each posting several podium finishers. (Contributed)

MOBILE – While the majority of their teammates were competing in the Spain Park Invitational, a select few standout track and field stars from Helena, Pelham and Thompson traveled to Mobile to compete in the Challenge of Champions between April 6-7.

The most impressive contingency was again from the Thompson Warriors, who had 10 noteworthy performances from different athletes, while Pelham four top five finishers and the Huskies one podium finisher.

One of the overall champions of the day was Jared Hurst, who claimed first in the boys’ high jump event with a height of 6 feet, 5 inches. The other first-place finisher for the Warriors was Jace Jones with an impressive showing in the one-mile run posting a time of 4:20.64.

In the girls’ one-mile run, McKenzie Hogue put together a strong performance as well posting a time of 5:01 to claim second place in the event.

Zoria Miller also had a strong finish by taking home second in the shot put with a distance of 38 feet, 3.5 inches.

Steve Villegas and Dominique Hall each had top five finishes as well with Villegas finishing fifth in the shot put with a distance of 52 feet, 6.75 inches, while Hall claimed fourth in the pole vault event clearing a height of 14 feet, 6 inches.

Niya Oden and London Wooley also stood out with finishes of sixth in their respective events. In the triple jump, Oden finished in a tie for sixth at a distance of 36 feet, 3.5 inches, and in the 300 meter hurdles, Wooley finished with a time of 47.01 seconds.

Pelham was highlighted by three podium finishes and one fourth-place finish.

In the 800-meter run, Katie Strozier took the top spot with a time of 2:12.6. Dorian Tolbert added a podium finish of his own by taking third in the discus throw thanks to a distance of 145 feet, 5 inches.

The other individual to claim a top-five finish was Alex Wilkins, who finished fourth in the 800-meter run with a time of 2:17.86. The 4X800-meter relay team also had a strong showing by finishing second.

The Helena Huskies were highlighted by none other than Allison Tanner in the girls’ high jump, Kirsen Gardner in the shot put and TJ Funches in the boys’ high jump.

Tanner finished third on the podium in the event thanks to a height of 5 feet, 4 inches, which was two inches off the winning height.

Funches also finished third in the boys’ high jump by clearing a height of 6 feet to claim a spot on the podium.

Gardner, a regular at high finishes in the shot put, was able to pick up a fourth-place finish in the event thanks to a total distance of 37 feet, which was just 1 feet, 10 inches off the winning mark.

By ALEC ETHEREDGE | Sports Editor The 2018 football season didn’t end the way Kyle Smoak would have liked after... read more