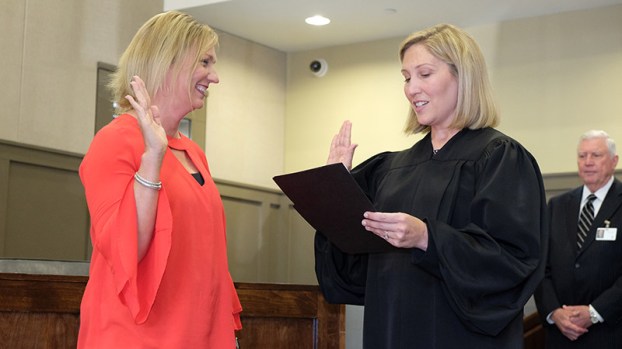 Johnson sworn in to Alabaster BOE

ALABASTER – The Alabaster Board of Education’s most recent meeting featured a new face, as the newest member of the BOE was officially sworn into her position.

Before the School Board’s April 8 meeting, Shelby County Probate Judge Allison Boyd administered the oath of office to Misty Johnson a few weeks after she was appointed to the board by the Alabaster City Council.

Johnson is filling the remainder of the term recently vacated by former BOE member Linda Church after Church moved outside of the city limits and was therefore no longer eligible to serve on the School Board. The term runs through June 2021.

Johnson has an extensive background in finance, and currently is the senior vice president and loan team manager for middle market banking at Wells Fargo. She previously worked at Iberia Bank, PNC Bank, RBC Bank and Regions Bank, and holds a bachelor’s degree in accounting from UAB.

Johnson and her husband, Gary, are longtime Alabaster residents who have had multiple children graduate from Thompson High School, and she is active with the Alabaster Sports and Entertainment Foundation.

When appointing Johnson to the School Board, City Council members touted Johnson’s strong financial background praised her and her husband for their many years of involvement in the city’s schools.