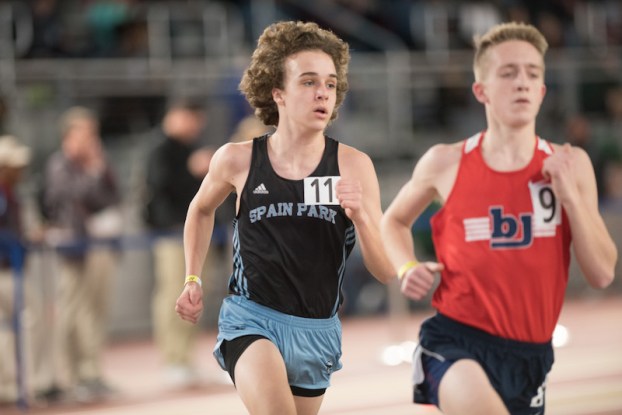 All of the local teams competing at the Spain Park Invitational on Saturday, April 6, had finishers on the podium. (File)

HOOVER – The 2019 Spain Park Invitational brought several of the best track and field teams from across the Birmingham metro area to the high school on April 6, with several standout performances from county teams.

Just a few weeks away from the state meet, Spain Park, Thompson, Helena, Calera, Chelsea and Briarwood all competed in the event and each team had multiple top three finishes in the event.

Host Spain Park had one of the most impressive days at its own event thanks to several different athletes finishing inside the top five.

Senior Jacob Warner had one of the strongest days thanks to finishing first in the 3,200-meter race and second in the 1,600-meter race. Steven Pate, Matthew Gray and Josh Wallace all had first place finishes for the boys as well.

Zac Shaw also had a strong showing in the shot put finishing third, while picking up a second top-three finish in the javelin throw by finishing second.

In the javelin throw, Josh Wallace finished just ahead of Shaw by claiming the top spot with a distance of 181 feet, 5.75 inches.

Daris Robinson, Grant Sims and Zack Cooper finished inside the top three as well to close out the top five performers for the boys.

In the long jump, Cooper picked up a podium finish of third, while Sims finished just behind in fifth. Robinson was able to claim third in the 300 meter hurdles.

The girls were highlighted by several first place finishers, including Sydney Taylor who claimed the top spot in both the 100-meter dash and 200-meter dash.

In the 800-meter run, Mackenzie Culpepper finished first with a time of 2:27.76, while teammate Lyric Bryant finished in third. Bryant also claimed fourth in the 1,600-meter race.

Individually, Anna Collins was the last first-place finisher by claiming the top spot on the podium in the pole vault event. She finished ahead of teammate Makenna Kuhn in third.

As a team, the 4X800-meter relay team took home first, while the 4X100-meter team finished third.

The Thompson Warriors also had a strong showing despite several athletes being at the Mobile Challenge of Champions.

For the boys, Gavin Gray was the lone first-place finisher by taking the top spot in the high jump with a distance of 6 feet.

Sam Reynolds and Tyreke Bivins had strong showings in the 100-meter dash with finishes of second and third, respectively. Reynolds finished the race in 10.96 seconds and Bivins in 11.12 seconds. Reynolds also finished fourth in the long jump.

J.B. Mitchell took home fourth in the 400-meter race, while Carson Youngblood and Nick Blackmon finished fourth and fifth, respectively, in the triple jump for the boys.

The girls were highlighted by Alayah King, who finished first in the triple jump, third in the 200-meter dash and fourth in the 400-meter dash.

In the triple jump, Tyara Irvin and Serenity Thompson were able to claim third and fifth, respectively, while Jill Douglas finished fifth in the 400-meter dash.

Julianne Knight also had a first-place finish in the high jump, while Autumn Alexander claimed fifth in the shot put for the final top-five finisher for Thompson.

The Helena Huskies were highlighted by two first place finishers in Brady Barton and Victoria Brown. Barton took home first in the 1,600-meter race, while Brown finished atop the podium in the discus throw.

Brianna Wilson also had a top-five finish in the discus throw by finishing fourth.

Christian Hill added two podium finishes for the Huskies, taking home second in the 110 meter hurdles and third in the 300 meter hurdles.

In the discus throw, teammates Garrett Hinds and Damian Hines finished third and fifth, respectively. The final podium finisher for Helena came in the shot put with Erin Fuller’s finish of second.

The Calera Eagles also had an extremely strong day at the event with several top five finishers.

Yowe also finished fourth in the 200-meter dash, which was just behind teammate Tyler Ray in second.

Jacobi Gaines and Phillip Douglas each added podium finishes as well with Gaines claiming third in the 110 meter hurdles and Douglas second in the shot put.

The Chelsea Hornets were highlighted by three top 10 finishers, including 3,200-meter champion Teanna Cason. She finished the race in 12:09.75 to claim the top spot, while also finishing third in the 1,600-meter race. In that race, she finished just ahead of teammate Avery Thompson in eighth.

Ladaris Gray was the highest finisher for the boys by taking home ninth in the 100-meter dash.

Briarwood closed out the event with six top five finishers individually as well as a third-place finish in the 4X800-meter girls relay race.

The only first-place finish came from Riley Margene in pole vaulting, as the freshman cleared a height of 12 feet, 6 inches.

Teammate Chance Beard had a strong showing in the high jump by finishing third with a height of 5 feet, 6 inches.

Chase Travis and Luke Hess closed out the boys’ top five finishes by claiming third and fourth, respectively in the javelin throw.

The girls’ 4X800-meter relay team took home third to close out the event.