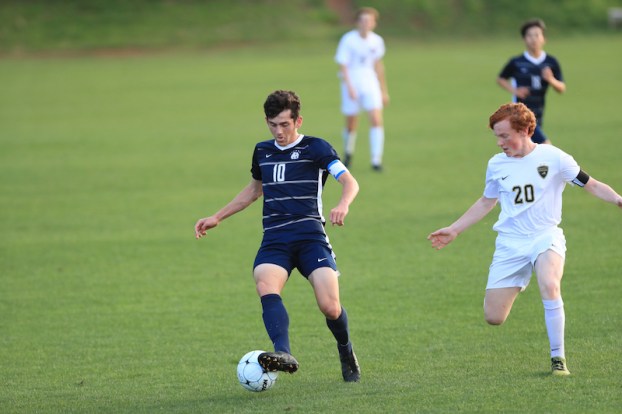 The Oak Mountain Eagles used two first half goals to take down Westminster at Oak Mountain 2-0 on Tuesday, April 9. (For the Reporter/Dawn Harrison)

NORTH SHELBY – Oak Mountain’s defense has been consistent all season on the pitch with any lead almost insurmountable, and that theme held true on Tuesday, April 9, when the Eagles traveled a mile down the road to take on Westminster at Oak Mountain in a county matchup.

The Eagles struck on two first half goals from Ryan Webb and Daniel Barrington, and let the defense do the work the rest of the way, as they went on to pull off a 2-0 shutout—their 10th of the season—to improve to 12-5 overall, while they still sit at 3-1 in area play.

Early in the game, you could see the aggressive nature of Oak Mountain, as the Eagles got plenty of early chances, including a free kick inside the box.

On what was a short look, the Eagles decided to dribble the ball instead of taking the direct shot, and a shot attempt eventually hit the line of defenders right in front of the keeper to keep the ball from going in.

After quieting down for a few minutes offensively, Oak Mountain got a couple more good looks, but never capitalized.

That changed with 13:37 to play in the opening half when Ryan Webb was able to get a wide open shot at the goal and took advantage to put the Eagles on top 1-0.

Oak Mountain continued to push the tempo and controlled the ball on their end of the field for the majority of the remaining time in the half and that paid off with 12 seconds remaining in the period.

Cody Wells started the threat when he sprinted with lightning-quick speed toward the goal and ended up just to the left of the goal post before crossing back to Barrington who was left by himself in the goalie box. With the keeper focused on Wells, Barrington got the ball and had nobody to stop the ball, as he calmly pushed it into the goal to put the Eagles on top 2-0 at the halftime break.

In the second half, Westminster tried its best to put more pressure on Oak Mountain’s defense and picked up a good shot on goal from Price Leonard 13 minutes into the period and added two corner kicks with 15 minutes to play, but those were the only three opportunities of the second half for the Knights, as the Eagles held off their comeback attempt for the 2-0 victory.