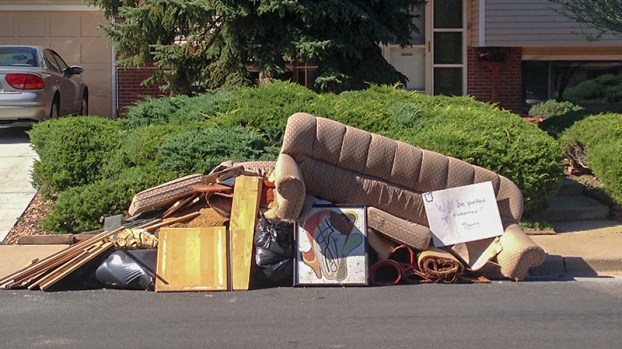 ALABASTER – Those looking to be among the first to get on the list for Alabaster’s new once-monthly curbside rubbish pickup will be able to do so later this month.

At the end of April, the city’s current weekly curbside rubbish pickup service will end, and will be replaced by a once-monthly service beginning in May.

In November 2018, the Alabaster City Council voted to end the weekly curbside rubbish pickup service at the end of April. After April, the city will continue to pick up curbside wood and yard waste, such as trees, leaves and grass clippings, each week.

During a March meeting, the council voted to enact a new monthly sign-up system for residents beginning in May, which will allow a certain number of residents to request curbside rubbish pickup for the first Monday of each month.

Through the system, residents will be able to visit the city’s website, visit or call City Hall, pay a $5 non-refundable fee and request a curbside heavy trash pickup. Sign-ups will go live two weeks before the first Monday of each month, and will begin on April 22 for the May 6 pickup day. Sign-ups will be limited to 100 slots, which will be filled on a first-come, first-serve basis.

Those who reserve a spot will be able to place their items to be picked up on the curbside the weekend before the Monday pickup. If the first Monday of the month falls on a holiday, the pickup date will be moved to the second Monday of the month. No commercially-generated rubbish, such as large amounts of construction debris from major projects, will be collected.

The city will also have two additional pickup days in April and September coinciding with the Shelby County Landfill’s free Saturdays.

Currently, Public Works uses grapple trucks to pick up any type of debris left on curbs throughout the city and transports it to the landfill. Public Works Director Mark Harris previously said issues arise when wood waste is mixed with other types of debris, such as household trash, furniture and other items, and then transported to the landfill. The Public Works curbside debris pickup service is separate from the city’s regular weekly trash and recycling pickup.

CHELSEA – This year’s Fire at the Foothills BBQ & Chili Cook-Off was the largest in the event’s nine years... read more